Mother and son team up to study at university - University of the Sunshine Coast, Queensland, Australia

Mother and son team up to study at university

A passion for criminal justice and a fascination for fantasy war games have inspired a Mary Valley mother and son to study together at USC.

Former Royal Australian Corps of Military Police investigator Kym Thompson, 51, has enrolled in a Criminology and Justice degree as a pathway to a new career in the criminal justice system.

“I have skills and experience but I decided to upgrade my qualifications to expand my career options,” said Ms Thompson, who intends to re-enter the workforce after a prolonged illness.

“I have waited a long time to be able to do something I really want and now it is my time.

“I would like to work within the criminology domain, but I also want to think outside the box and not close my mind to other opportunities that this degree may bring.”

Her decision to study at USC motivated her son Jai Thompson-Roach, a keen gamer who collects, constructs and paints miniature war game models.

Jai is in his first year of a double degree in Science and Arts and plans to major in creative writing and ecology.

“My career goals when I graduate are to write novels about the medieval fantasy battle game Warhammer, own my own games shop and work in the scientific field,” he said.

While many 21-year-olds might think twice about hanging out and studying with their mother, the graduate of the Brisbane School of Distance Education said there were many advantages.

“I have a live-in university reference guide and she cracks the whip when I get lazy!” Jai said.

Ms Thompson said the arrangement allowed them to travel together from their Mary Valley home to classes and study sessions at the USC campuses at Sippy Downs and Gympie.

“It is a bit of a juggle at times trying to create a timetable that accommodates both of us but we are lucky that USC is flexible and has alternative options for us,” she said.

“When one of us does not have classes and the other does, we utilise the time and study in the library at Sippy Downs. We have a great circle of friends from USC and we have regular study nights at the Gympie campus.

“I absolutely love USC, particularly being able to start at the smaller Gympie campus. There is a lot of help available in all areas and I love seeing more and more older people taking up the challenge.”

Jai and his mother both completed USC’s Tertiary Preparation Pathway (TPP) before starting their degrees, and said they would recommend it to anyone thinking of studying at university.

“We found it fantastic and still use what was taught in those classes,” Ms Thompson said. “It is especially important if you haven't studied for a while and even if you have just come out of school, as it gives you the right tools to do the job right.”

Applications are now open to study at USC in 2018. For information visit www.usc.edu.au/learn 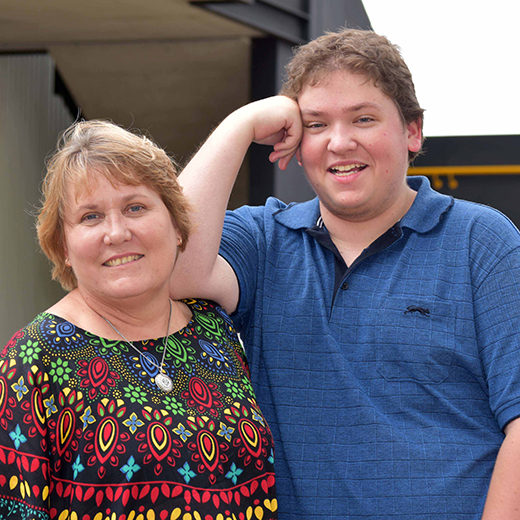