Hundreds of invited guests attended the investiture ceremony at USC on Monday 7 August at which Sir Angus, who was the Chief of the Australian Defence Force from 2005-2011, took his oath of office and was formally presented with the Chancellor’s robe.

Sir Angus will lead the University’s governing Council and be responsible for strategic and governance oversight. He will ensure USC remains accountable to its strategic goals, as well as to its students, staff and communities.

“I am humbled to be selected for this important role in a university that continues to grow and contribute substantially to its communities from the Fraser Coast to Brisbane,” he said.

“USC is doing a great job of enabling young people to become skilled, innovative and adaptive people who will excel in the increasingly challenging economy of the future.

“I’m looking forward to playing my part in a university that demonstrates high academic and research standards internationally and nationally and contributes substantially to its broader regional community.”

He has worked closely with USC since 2011. As Chair of USC’s QMNI Foundation Board, he was a driving force behind the establishment of the Sunshine Coast Mind and Neuroscience – Thompson Institute, and has helped position USC as a leader in community mental health.

Sir Angus retired as Chief of the Australian Defence Force in July 2011 after 41 years of service in the military.

He was awarded the Knight of the Order of Australia in 2015 for extraordinary and pre-eminent achievement and merit in service to Australia, through distinguished service in the Australian Defence Force, continued commitment to serve the nation in leadership roles, particularly the national responses to the MH370 and MH17 disasters. 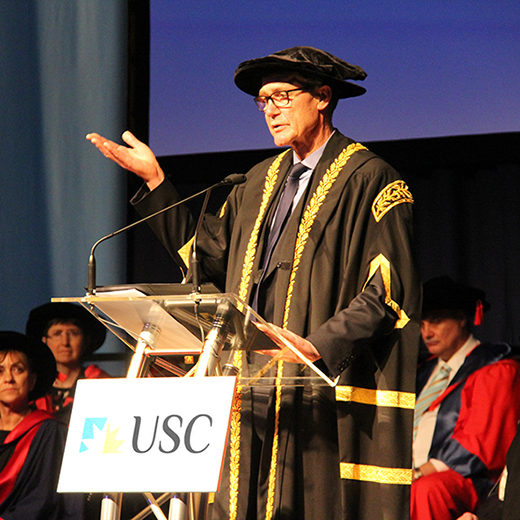