A national champion netballer, an assistant seal trainer and an airline pilot are among the USC Social Media students who have helped 47 Sunshine Coast businesses and non-profit groups improve their communication strategies this year.

“It’s great experience for the students, who work with the employers to target social media for corporate communications,” she said. “We’ve had fantastic feedback from employers.”

It was a rewarding first USC course for Kelsey Browne, who moved from Geelong to the Coast late last year when she was signed to Sunshine Coast Lightning national netball team.

“I loved working with The Autism Treehouse, which provides help for families living with autism, and I learned a lot about the local community,” she said.

“They were excited about my strategy and keen to start the ball rolling on a few ideas. I created their LinkedIn profile to help them network for partnerships, funding or sponsorships. Their Facebook page has lots of potential, with 1,500 followers.”

Kelsey said it got “crazy” at times as she juggled study with netball training, travelling and competition – including winning the grand final in June, around exam time.

“USC was so helpful when I was picking the degree I wanted to do and (lecturer) Karen Sutherland was amazing during the course,” she said.

“I’d like to work in communication or PR or journalism and I picked this course as my first because I’m really passionate about social media. It’s a big part of my job as an athlete too.

“As an athlete, if you can pick off your uni degree bit by bit, it’s a great sense of achievement – sometimes more than the games, because of the challenge of fitting it in.

“I’m so proud of myself and am looking forward to this new semester in my off-season, when I’ll have more time to put into study.”

Maddison drew on her love of conservation and job as assistant to the seal trainers at SEA LIFE at Mooloolaba as she created content for Sustainable Organisations Sunshine Coast.

“It’s a community-based initiative of the Sea Life Trust to promote sustainable lifestyles and protection of marine life, so I started by blogging four ways that people could reduce their plastic pollution,” she said. “I also did a video with cool underwater footage.

“They said my strategy was awesome. Working with people in the industry has shown me how the theory is relevant to real life.”

Maddison said enrolling at USC after attending Siena Catholic College next door was a “perfect match”.

“I started in Accounting but swapped in my second year because Marketing resonated more with me,” she said. “I was intrigued by digital marketing and this year chose the Social Media minor because it’s such an emerging element in society.”

Pilot Jeff worked with Australian music artist Tobias, who plays festivals across the country and has had national radio success with his folk-rock songs. 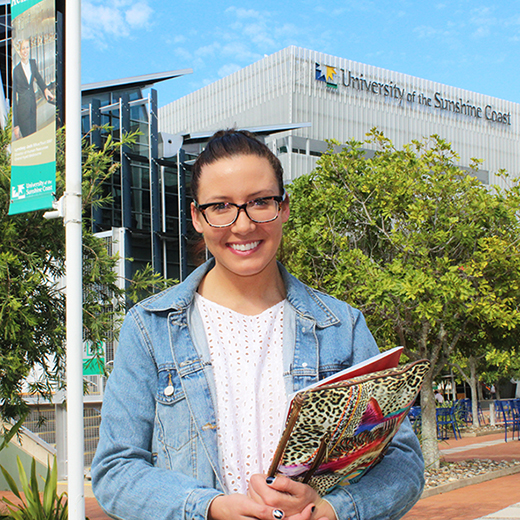