Hervey Bay restaurateur and former paralegal Lianne Esposito gained an unexpected bonus from graduating with a USC Master of Creative Writing – a job as a feature writer with News Corp Australia.

Ms Esposito said her career goal was to write her first novel when she joined the first cohort of students in USC’s new one-year Master of Professional Practice (Creative Writing), introduced last year.

“Towards the end of the program, with an increased confidence in my writing ability, I decided to look for a writing job in my local region which led to a position at the Fraser Coast Chronicle,” the 56-year old said.

“To become a professional who is paid to write is extremely rewarding.”

She is also putting the finishing touches to her first novel, Ostarbeitar, The Other Mother, a global tale about war and women’s survival over generations in multicultural Australia.

“I enrolled in USC’s creative writing program as I had a few unfinished manuscripts which needed completing and I did not have the confidence, discipline or literary refinement to ‘put them to bed’,” Ms Esposito said.

“While I had previous tertiary education in writing and publishing, this postgraduate degree added an extra dimension and refinement to my English language writing skills.”

Taking advantage of the option of online study, Ms Esposito balanced her studies with a position as a legal content writer with a Hervey Bay law firm and helping run her family‘s Paolo’s Pizza Bar in Torquay, Hervey Bay.

The hands-on writing program involves intensive workshops under the mentorship of highly-qualified academics and published authors to help aspiring writers enhance their skills in editing, writing and creative practice.

As part of the program, Ms Esposito completed 60,000 words of her novel under the supervision of Dr Ariella Van Luyn, the author of Treading Air, and several short stories.

“It was a very positive experience to work with Dr Van Luyn, and other lecturers who have industry connections and expertise in the real world,” she said.

Ms Esposito said her novel recounted the childhood memories of an Australian girl living among an ethnic community during the 1960s, and the story of her ‘other mother’, a Ukrainian woman stolen as a war slave under the Nazi Ostarbeiter (Eastern Worker) Program.

“These two lives are interwoven across cultures and time and the narrative demonstrates how the power of love, support and compassion can heal the condition of abused women.”

Information on studying at USC in 2018. 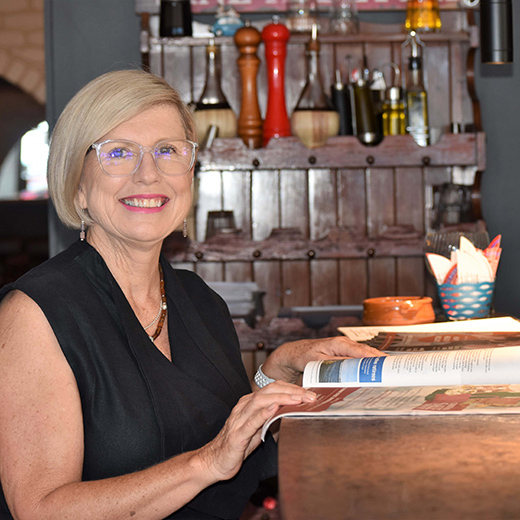