Associate Lecturer in Serious Games Dr Colleen Stieler-Hunt was one of only 18 people worldwide to gain an International Game Developers Association scholarship to attend the five-day Game Developers Conference that attracts almost 30,000 participants.

She will leave later this week for a trip that will include tours of gaming studios, question and answer sessions with major industry players, a personal mentor, networking events, and attendance at conference sessions.

Dr Stieler-Hunt, who recently completed a PhD project on video games in classrooms, said she was thrilled about the prospect of engaging with some of the world’s best-known game developers.

“I was the only Australian to receive one of these scholarships, which is quite an honour,” she said. “Attending the conference has been a long term goal for me – it’s such a great opportunity to learn from the people working at the highest level in this field.

“I’ll be meeting some of the industry’s movers and shakers, and I’m hopeful that it could open up avenues to collaborate on projects in the future.

“I’ve used a lot of the recorded talks from previous Games Developers Conference in my own Serious Games classes here at USC.”

Ms Stieler-Hunt said she would have the chance to give a presentation on ‘Orbit’, a child sexual abuse prevention computer game developed at USC.

“It’s a topic that’s really important, but it’s something that parents and teachers find really hard to address with kids,” she said. “This game provides a less confronting way to talk about those issues.

The conference runs from 27 February to 3 March at the Moscone Centre in California. Ms Stieler-Hunt’s travel will also be supported by Screen Queensland. 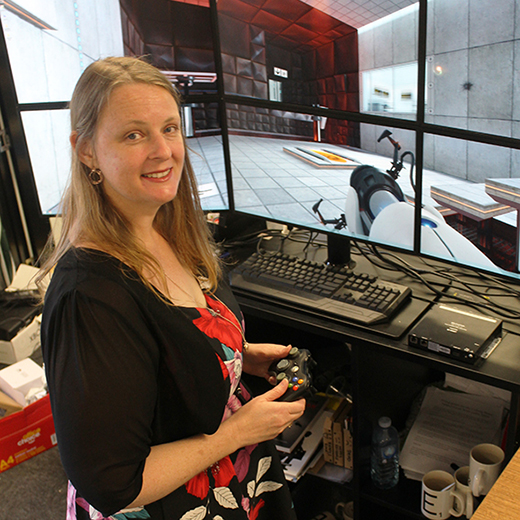