A South African entomologist has arrived at USC to work with forestry researchers in combatting a tiny pest that is devastating eucalyptus trees around the world.

University of Pretoria Postdoctoral Research Fellow Dr Michelle Schroder will spend the next two months collaborating with researchers at USC’s Forest Industries Research Centre, with her visited funded by an Australian Award Fellowship worth more than $30,000.

Dr Schroder will undertake an extensive field survey of the gonipterus weevil, which is native to Australia, and search for matching parasitoid wasps that kill the weevil’s eggs or larvae.

The weevil is just 10mm in length, but has caused extensive damage to South Africa’s eucalypt plantations – a major pillar of the country’s forestry industry – by chewing through new growth on trees.

Dr Schroder said weevil outbreaks have grown in South Africa in recent decades, after almost a century of seemingly acceptable biological control by a parasitoid wasp.

“The gonipterus weevil is native to Australia, so numbers are kept in check here for the most part,” she said. “But in South Africa and other countries, it’s become invasive and is has had a major economic impact.

“The aim of my work with USC is to find a parasitoid wasp species that is a better match to combat the weevil, and is also better-adapted to certain South African climate conditions.

“The Australia Awards Fellowship is an amazing opportunity, and I’m grateful to be working with the researchers from the USC Forest Industries Research Centre team.”

Dr Schroder will start her research with a road trip from Adelaide and up the east coast of Australia, collecting samples of various species of weevils and potential parasitoid wasps.

USC Forest Health Research Fellow Dr Helen Nahrung said the collaborative research project was taking on a pest that has become increasingly problematic in the past 20 years.

“Until quite recently, the gonipterus weevil was thought to be just one species, but we now know it’s actually eight different species,” she said.

“We’re hoping that the project will give South Africa a better matched biocontrol agent. That could be extended to other countries, including in South America, as well as Western Australia, where it’s an introduced pest.

“The information we gather in this partnership will have a real impact on pest management internationally.”

The research project is part of a global collaboration that includes Brazilian, Portuguese and Chilean agencies, led by USC, which is aimed at targeting Australian-origin eucalypt pests.

The Australian Award Fellowships are an initiative of the Australian Government’s Department of Foreign Affairs and Trade. 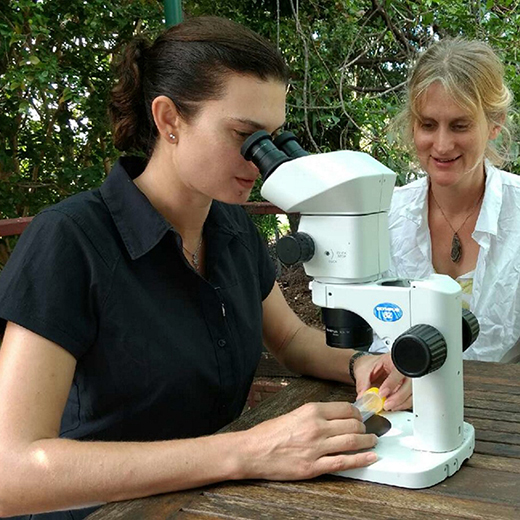