A former Supreme Court judge will lead a masterclass in mooting and negotiation at the USC Law School on Friday 24 February.

About 30 USC Law students, staff and local practitioners will attend the Legal Competitions Masterclass from 9am to 5pm, which will feature a keynote address by Justice Henry Fryberg, who served on the Queensland Supreme Court from 1994 until 2013.

The seminar will be run by the USC Law Students’ Association (LSA) and will develop participants’ skills in judging and coaching mooting (mock trials) and negotiation competitions.

“He’ll bring an immense judicial knowledge and give the participants his first-hand perspective as a Supreme Court judge, as well as a renowned barrister,” she said.

“Mooting is very popular at USC – we have a lot of students extremely engaged in competing, and we have Law School staff who are passionate about the benefits it brings students.

“Mooting obviously develops students’ oration skills, but they also learn to work under pressure and use teamwork to solve legal problems. Those are critical skills for a lawyer.”

The afternoon session of the masterclass will feature a seminar from respected Queen’s Counsel Dr Jacoba Brasch, who has more than 15 years’ experience practising in family law, mental health law, and customs and excise cases.

USC LSA president Callum Lee said the high level of participation in USC’s mooting competition each year meant that there was a growing need for competition judges.

“When we first started our USC Mooting Competition we had eight teams in the running, and that’s now increased to 15,” he said. “We want to make sure that competition keeps getting better, and so we’d like to get more judges on board.

“It’s also a chance for students to know more about what judges are looking for, which will help when they stand up and compete on the national and international stage.”

In 2016, Callum was part of the USC team that won an international negotiation competition held at the National Law University Delhi in India, ahead of 28 other university teams from across Asia, Europe and the Pacific for the honour. 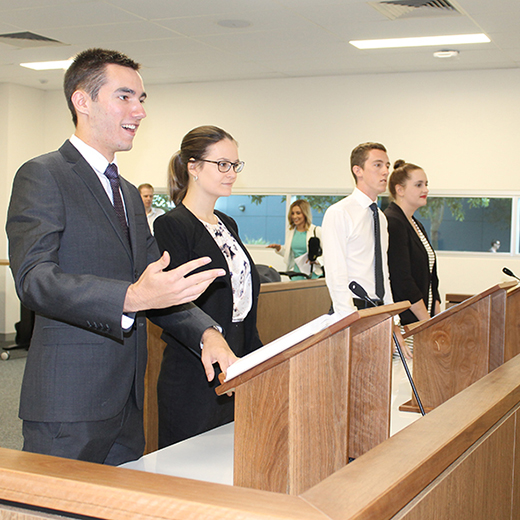