After more than 20 years in the armed forces, a former Petty Officer Boatswain’s Mate has swapped the decks of a navy ship for the nursing labs of USC.

Kelly Scott, who joined the Navy at the age of 17, is enrolled in a Nursing Science degree at USC’s Fraser Coast campus after deciding it was time for a major career and lifestyle change.

“I was searching for a profession that would match the fast-paced, critical thinking roles I was used to in the Defence Force and nursing seemed to be a natural fit,” said Mrs Scott, who comes from a proud military background.

She grew up on naval bases around Australia while her parents, Sue and Terry Meehan, now also living in Hervey Bay, served as naval officers. Mr Meehan is a former president of the Queensland branch of the RSL and former deputy president of its national body.

Mrs Scott said she loved the challenge of working as a Boatswain’s Mate during her naval career, which included deployments to Borneo, the United States and East Timor.

The death of her husband, a fellow Navy officer who she met while serving on the HMAS Darwin, led to the move to Hervey Bay with her four children from Canberra a few years ago.

“I was originally hoping to find a career in Hervey Bay using the skill set I had gained from the Navy, but decided if I was going to start a new career, now was the time to do it, especially with USC offering the nursing degree at its Fraser Coast campus,” she said.

“It has been great to start something completely new and different,” she said. “I am enjoying the course and the challenge of engaging my brain in a different way.”

Mrs Scott said she was leaning towards working in trauma or emergency nursing once she completed her degree.

“In similar way to my working environment in the Navy, I believe nursing will offer versatility, lateral movement, professionalism and the opportunity to travel.”

Applications remain open via QTAC for Nursing Science and other degree programs at USC Fraser Coast. For details go to www.usc.edu.au/learn. 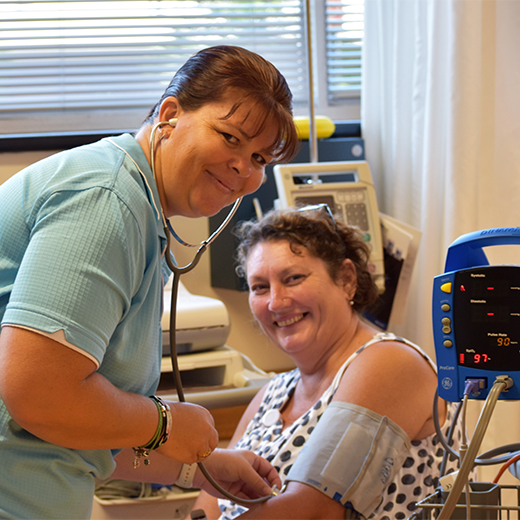