The doubling of enrolments within 12 months has given USC Fraser Coast plenty of reason to celebrate as the University marks its first year in the region on Wednesday 1 February.

Almost 500 students are currently enrolled at USC Fraser Coast, compared to 251 at the same time last year when the campus at Hervey Bay was officially handed over to USC from the University of Southern Queensland.

USC’s Vice-Chancellor Professor Greg Hill said the introduction of eight new degrees for 2017 and a strong emphasis on face-to-face teaching were believed to have contributed to the surge in student numbers.

Professor Hill said several new academic staff with outstanding research and lecturing credentials had been appointed to accommodate the increase in students and study programs.

New staff include behavioural and evolutionary biologist Dr Dominique Potvin who holds a PhD in Zoology and has conducted postdoctoral research at universities in Canada and Finland, and at the Australian National University.

Dr Potvin will lecture in Animal Ecology at USC Fraser Coast. Animal Ecology is one of three new full Bachelor programs to be offered at the campus in 2017, along with degrees in Tourism, Leisure and Event Management and Business.

USC Fraser Coast’s new Social Work degree will be delivered by Dr Kate Jonathon, an experienced social worker and mental health nurse from the UK, who has held academic positions at the University of Bolton and the University of York.

Social Work is one of five additional degrees that will give students the flexibility to undertake their first year of university locally and complete the remaining subjects at USC’s main campus on the Sunshine Coast. The others are Science, Counselling, Social Science and Psychology.

More offers are likely to be made to students throughout February during further QTAC offer rounds, taking the number of students to about 580 by the start of Semester 1 on Monday 27 February.

“As we approach the first anniversary of USC Fraser Coast, we are pleased to say that the expansion of the campus has exceeded expectations,” Professor Hill said.

“This is an indication that students and the wider community are satisfied by USC’s commitment to delivering a diverse and flexible higher education offering in the region.”

Professor Hill congratulated those who have received offers so far, and encouraged all new students to join in Orientation activities at the campus on 24 February.

People can still apply to study at USC Fraser Coast for Semester 1. For details go to www.usc.edu.au/learn. 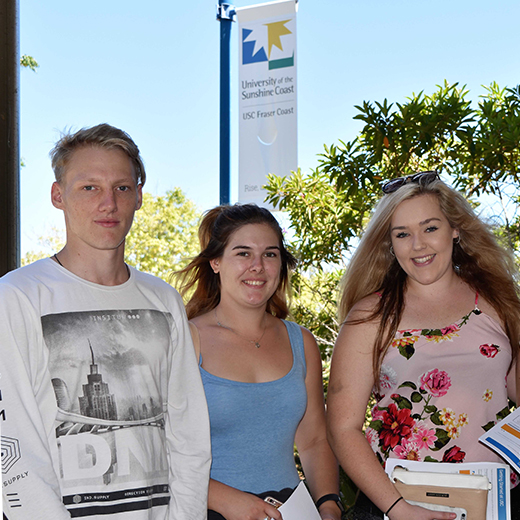