The Welsh national swimming team has set up camp at the USC pool at Sippy Downs to become familiar with the venue it will call home ahead of next year’s Commonwealth Games.

Twelve swimmers and six officials in distinctive red Swim Wales uniforms arrived on Saturday for two weeks of training in the summer heat of the Sunshine Coast – leaving behind the chilly UK, which was expecting snow this week.

The squad’s daily training schedule involves two pool sessions (from 8.30-10.30am and 5-7pm) and a workout in the USC gymnasium.

Welsh National Performance Director Ross Nicholas said his squad was enjoying this opportunity to experience training on the Sunshine Coast before travelling to the Gold Coast later this month.

“The idea was to do a mock run of what we’ll be doing for the Commonwealth Games next year,” he said.

“Everything has been above and beyond our expectations, particularly in terms of the welcome we have received here and the facilities. Our swimmers are loving it and they are working with such an amazing attitude.”

USC Sport Manager Nathan Gordon said the Welsh swimmers were impressed by USC’s Olympic-standard pool and gymnasium facilities and were “smiling from ear to ear” about the warm weather.

Sunshine Coast Council Tourism Sport and Major Events Portfolio Councillor Jason O’Pray said council had worked hard to attract athletes from Wales, Scotland, the Isle of Man and Niue to the Sunshine Coast in the lead up to next year’s Commonwealth Games.

“It’s terrific to see the Welsh swimmers here now getting a feel for the Sunshine Coast and the world-class facilities at USC,” Cr O’Pray said.

“Given the enormous following that elite athletes enjoy on social media networks nowadays, every photo and great experience they post online about their time on the Sunshine Coast will be seen by potentially millions of other people right around the world.

“Having these Commonwealth Games teams here can only be fantastic for our local community and local businesses and we’re already seeing some wonderful opportunities here at USC with our local swimmers having the chance to watch the elite Welsh swimmers up close.

“We certainly look forward to having more athletes and teams coming here in 2017 and we’re excited to have them all here next year before the Gold Coast Games begin.” 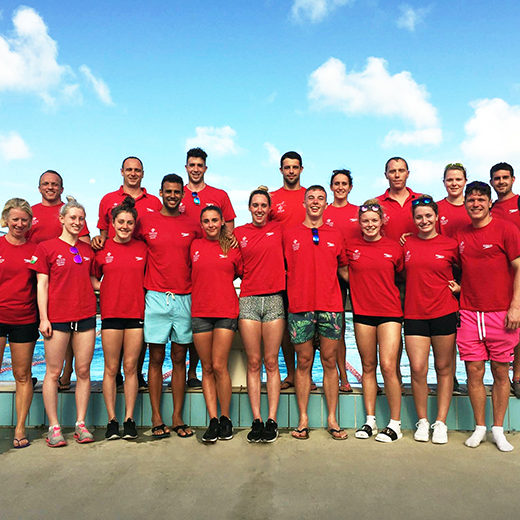