An exhibition that helps mark the 50th anniversary of the naming of the Sunshine Coast and celebrates the spirit of the region will be on display at the USC Art Gallery until 19 August.

From the mountains to the sea: Sunshine Coast stories brings together objects, artworks and memorabilia from across the region that span from ancient times right through to the present day.

About 160 people attended the official opening on Saturday by Sunshine Coast Mayor Mark Jamieson, who described the exhibition as a fantastic collaboration of Sunshine Coast Council and USC.

“We especially appreciate the input we received from our community members who have shared their memories and personal effects, ensuring the exhibition showcases some personal Sunshine Coast stories,” he said.

“I’m sure visitors will enjoy what is a very engaging and informative showcase of our local history over the past 50 years and beyond.”

Exhibition curator Peter Connell from Sunshine Coast Council said the exhibition was not limited to the past 50 years nor did it set out to provide a comprehensive overview of the region’s heritage.

“It responds to both the remarkable and mundane items that have survived the test of time and have been preserved in public and private collections across the region,” he said.

“The name ‘Sunshine Coast’ was not only part of a marketing scheme for the region previously known as the ‘Near North Coast’, but also an encapsulation of some of the values, ideals and aspirations for the future of the community.”

Mr Connell said museum and heritage organisations across the region had been integral in the development of the exhibition and generous in making objects available on loan.

“Some highlights in the exhibition include the Kabi Kabi Community possum skin cloak that was created for a cultural revitalisation project initiated by the State Library of Queensland last year, and I’m also quite fond of a hand-whittled hunting dog sculpture by Jim Hall loaned from the Peachester History Committee,” he said.

Ma and Pa Bendall’s surfboards are a real slice of Coast’s surf culture and some of the region’s more recent tourism history is captured in items from local theme parks such as the Pineapple Pete costume from the Big Pineapple, and carriages from the now decommissioned Wild Mouse roller coaster at Aussie World.

“The landscape of the Sunshine Coast, from the Glasshouse Mountains to its pristine coastline, has captured the imagination of artists, architects, musicians and designers for generations,” she said. “And it continues to inspire.

“We have such rich collections of art in the region that hold works by artists such as Lawrence Daws, Franki Birrell and Charles Backman – artists who have either lived here or have a connection to the region – and have found this place and its character their muse.”

As part of the exhibition, local filmmaker Chris Peckham was commissioned to create a film that celebrates creativity in the region.

“I interviewed local authors, artists and architects on how their lives and work on the Sunshine Coast have been influenced by the region’s landscape and people,” Mr Peckham said. “Each story follows the lives and work of these creatives.”

The USC Art Gallery is located at USC’s main campus on Sippy Downs Drive, Sippy Downs. It is open free to the public from 10am to 4pm Monday to Saturday and closed Sundays and public holidays. 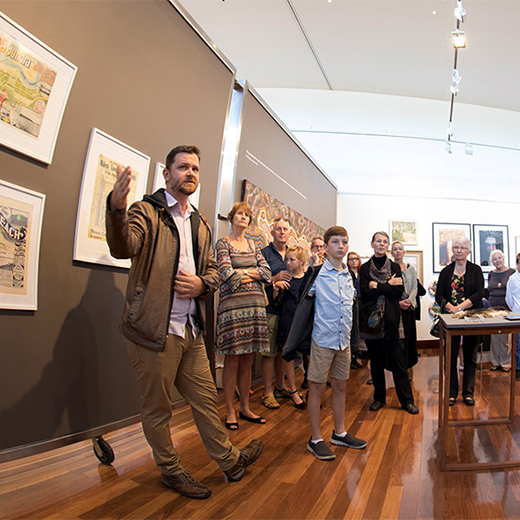 USC Art Gallery will reopen on Monday 17 August after closing its doors for 10 months to complete a $1.4 million redevelopment.