Rachael Wynne, of Mitchelton in Brisbane, won the Three Minute Thesis contest for describing within 180 seconds how ‘Road safety is in the eye of the beholder’.

Ms Wynne asked the audience to imagine driving on a road and suddenly seeing a pedestrian step in front of them.

“You slam on your brakes and think, ‘where did they come from?’ Unfortunately, this error of ‘looking but failing to see’ is all too common,” she said.

“Research has continually shown that novice and experienced drivers scan their visual field differently. My research will collect data on the eye movements of learner drivers in particular.”

Her prize was a $1,000 travel scholarship to the Asia-Pacific 3MT competition on 29 September.

Dr Nicholas Paul, of Buderim, beat 14 other academics to claim victory in the $1,000 Minute to Win It contest for his presentation in under 60 seconds on ‘Algae – good for you and the environment’.

The algae scientist told the audience some “delicious facts” about his favourite topic, such as algae’s ability to produce oxygen and Omega-3 fish oil.

“We can change the face of aquaculture in our country by growing this superfood in the ocean off our coastline,” he said.

Runner-up in the Three Minute Thesis event, which was open to higher degree by research students, was Rachele Wilson. Her presentation about the pollen diets of Australian native bees and their value to the environment earned her $500. 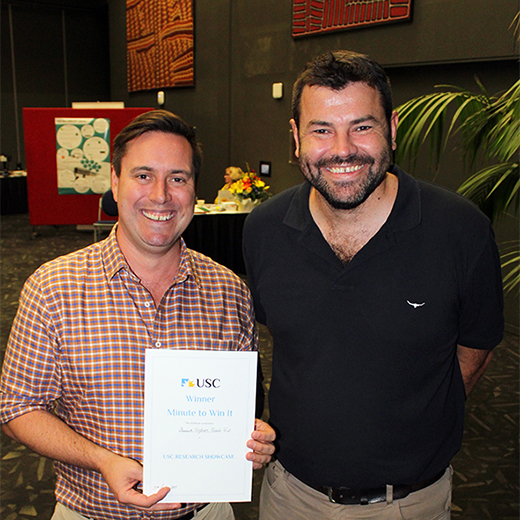