USC’s ‘flying scientist’ to take science to the Cape - University of the Sunshine Coast, Queensland, Australia

USC’s ‘flying scientist’ to take science to the Cape

A USC scientist will take her crown-of-thorns starfish research from the Sunshine Coast to Cape York after being chosen as a National Science Week ‘flying scientist’.

PhD researcher Meaghan Smith, 26, will travel to the remote North Queensland community of Kowanyama to run a series of workshops from 14-19 August aimed at inspiring local young people, particularly girls, to consider careers in science.

The Maroochydore student was one of 30 female scientists from across Queensland selected for the outreach program, which is known as ‘Catch a Rising Star’. She will be joined by two fellow ‘flying scientists’ – a physicist and a protein crystallographer.

Ms Smith, whose PhD project is investigating ways to slow the breeding of the highly toxic crown-of-thorns starfish, said she hoped to use the visit to expose school students and the wider Kowanyama community to some cutting-edge scientific techniques.

“It’s fantastic to bring some exciting experiments to communities that wouldn’t be able to experience this kind of thing ordinarily,” she said. “We’ll be engaging them in activities like growing crystals and doing some hands-on marine science.

“We want to break down some stigmas about careers in science, and show how diverse the field is. You don’t have to be a natural-born genius to be a scientist, or work in a big city, or be stuck in a lab all day.

“Statistics show that very few young women pursue science as a career path, even though they’re interested in the field. So, I’d love to inspire some girls in Kowanyama.”

Ms Smith recently returned from several months in London, where she was conducting neuropeptide testing on crown-of-thorns starfish for her three-year PhD study.

She said by gaining a better understanding of the molecular communication between the animals, scientists could develop more powerful biocontrol methods for the destructive species.

“The crown-of-thorns is still a huge problem for the Great Barrier Reef,” she said. “They are plaguing, eating and destroying coral on a mass scale.

“The starfish communicate with each other to gather together for spawning, so we’re hoping to interrupt that cycle to slow their prolific reproduction.

“The project is tracking well, and I hope that my findings will eventually contribute to giving the reef a chance to survive and thrive.” 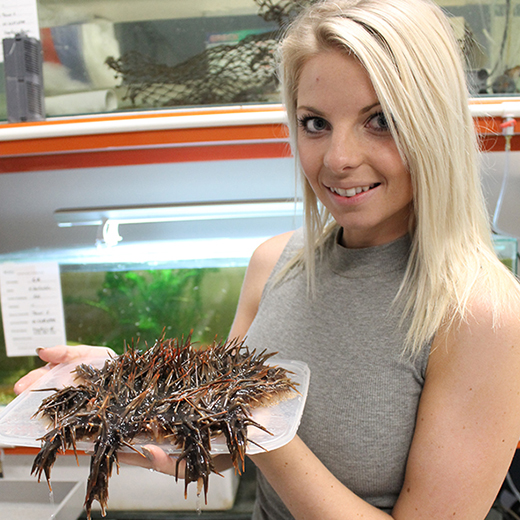