Child safety campaigners Bruce and Denise Morcombe will this week launch a new version of a space-themed online game that provides children aged 8-10 with strategies to avoid sexual abuse.

The original game, Orbit, was created several years ago by USC academic Professor Christian Jones, who has since worked with the Daniel Morcombe Foundation to develop Orbit Rescue – an app version of the game that can be used on a variety of devices.

Bruce and Denise said they were thrilled to be involved in the interactive and educational game that has been designed to enable children to recognise predatory behaviour in an ever-changing online world.

Professor Jones said feedback from teachers and students had been used to significantly improve the original Orbit game that was launched by Bruce and Denise at USC on the national Day for Daniel in October 2013.

“Orbit Rescue is now an iPad and Android tablet app, so children can use touch controls rather than keyboard and mouse. The app doesn’t require a login or a network connection, and there are more character customisations,” he said.

“The game takes less time to play, is easier to complete, and is easily downloaded and installed from the App store and Google Play.”

Bruce and Denise said the new version of the game was great fun yet retained the proven learning outcomes for children around sexual abuse prevention.

“Protecting children from sexual abuse and the dangers that exist online must be our highest priority,” they said.

“Orbit Rescue will teach children in a non-threatening way to recognise predatory behaviour – like secrets, special gifts and other grooming techniques. This could be from an adult they know in the real world or a ‘friend’ that they have never met but frequently chat to online. The game then illustrates safety strategies like reporting.”

The free game contains no in-app purchases and does not collect personal information. It can be found online by searching for Orbit Rescue at app stores. For details about Orbit Rescue and other child safety educational resources, go to www.danielmorcombe.com.au 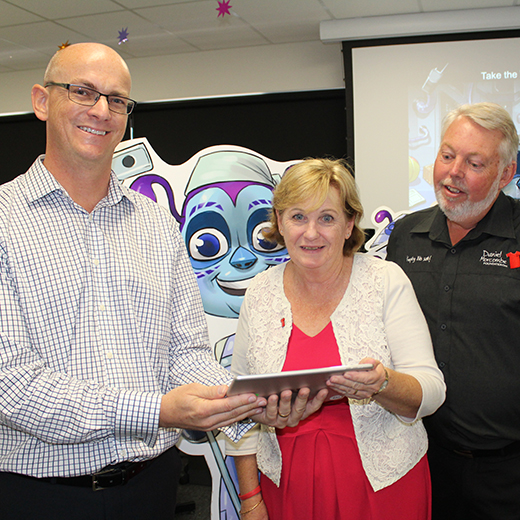