She is one of the Fraser Coast’s most popular radio announcers, but after seven years on the airwaves, Triple M’s Davina Ebenezer is now studying nursing science at USC Fraser Coast.

“I went from hosting my own drive shift on Triple M on the Friday to excitedly sitting in nursing lectures on the Monday,” said Davina, who joined almost 600 new and continuing students at the campus in Hervey Bay for the start of Semester 1 this week.

The 30-year-old said a series of recent events convinced her to give up her coveted full-time live radio gig and follow a calling she had harboured for several years to become a nurse.

“Just before Christmas, an elderly man fell and hurt himself at a club I was visiting, and I helped him until the paramedics arrived,” she said.

In a strange twist of fate, a few weeks later Davina found herself again applying the first aid skills she gained working as a young auxiliary fire brigade officer when a woman fell outside the radio station in Maryborough.

“Both times I received the most beautiful thank you messages from the people I helped which really touched me, and there have been other instances lately that made me realise I wanted to finally take this to the next step,” she said.

The Toowoomba Christian College graduate said she had applied for university many times before, but had not found the courage to start a degree.

“I think I was scared and was making excuses, but I am not scared anymore,” she said. “I feel the calling and feel like all the cards are falling into place and am ready to make a change.”

Davina said she was enjoying her university experience at USC Fraser Coast, which was not as daunting for her as she expected.

“The lecturers are so approachable and I love the small classes and that it is a lot more one-on-one,” she said.

“I am also loving the diversity of this campus. I am making contacts with these amazing people that I wouldn’t have met elsewhere and it has just opened up to me a whole new world.”

The former Hit FM breakfast announcer and local social media manager for Southern Cross Austerero is not giving up live radio completely. She will work on a casual basis as she studies, and fans can follow her live crosses from the Triple M Road Runner into the breakfast program. 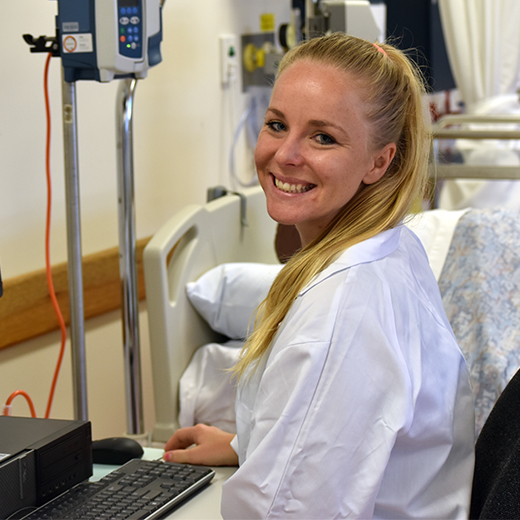