Some of the country’s best Quidditch players, including members of the World Cup-winning Australian team, will soon fly in for the region’s first national Quidditch tournament at the University of the Sunshine Coast.

About 70 players have signed up for the Sunshine Coast Fantasy Quidditch Tournament that will be hosted by the USC Dementors team at the University’s Sippy Downs campus from 8-9 April.

Quidditch is a ground-based version of the high-flying game made famous by JK Rowling’s Harry Potter book series, and involves players running with broomsticks between their legs throughout the match.

“We’re expecting up to 70 players to be playing some really high-quality, fast-paced Quidditch over two days,” she said. “It will be great to see some world champions competing on our home turf at USC.

“This ‘Fantasy’ style tournament means that we’ll see players from states around Australia mixed together into new teams for the tournament.

“It’s a fantastic sport for spectators, and we’ll have people there to explain how it all works for those who might be watching Quidditch for the first time.”

Alise said that while Quidditch had its roots in the fantasy world of Hogwarts, the sport was now attracting talented athletes in competitive leagues around Australia and internationally.

“It’s a very intense, full-contact sport,” she said. “Quidditch incorporates skills from a lot of different sports. There are aspects of rugby, basketball and OzTag. There’s a lot going on and you have to work hard to keep up.”

Matches will run from 9am-3pm each day of the tournament, which will take place on USC’s main rugby field. For more information, visit the Sunshine Coast Fantasy Quidditch Tournament event page on Facebook. 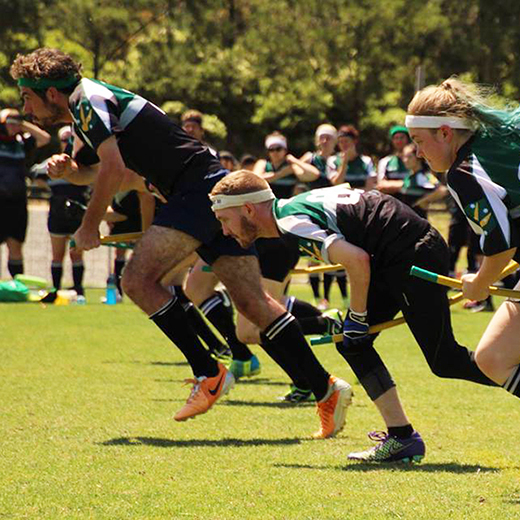