Sunshine Coast Lightning’s sensational goal shooter Caitlin Bassett has signed up to study at the University of the Sunshine Coast.

The 28-year-old Australian Diamonds representative, who is the leading goal scorer in the national Suncorp Super Netball league, is pursuing her academic goals through cross-institutional enrolment in a Bachelor of Communications at USC and Edith Cowan University in Perth.

The Sunshine Coast Lightning is based at USC, which makes fitting in classes around training, gym sessions and team meetings a simple prospect for Caitlin.

“Now that semester has started, I’m training at the USC Stadium in the morning, then moseying on over from gym to class,” she said. “The campus is one of the most beautiful I’ve seen, and everything is really accessible.

“Studying a Communications degree, majoring in Broadcast and Journalism, is the perfect match with my sporting career, because so much of what I do related to netball is great work experience.

“Netball, and female sport more generally, is starting to get a lot more media coverage, so it’s a great time to be expanding my knowledge in that field.”

In addition to Caitlin’s training and study commitments, the goals shooter is honing her sports journalism skills by writing a regular column in the Sunshine Coast Daily and presenting a weekly segment on Hot 91 FM, facilitated by Lightning team management.

“Athletes can utilise USC Stadium, the gym and pool, and access other high performance facilities and research programs while studying on campus,” Smith said.

“This was part of the attraction for Caitlin when we recruited her to Lightning, and it is fantastic to see that she has been able to transfer her studies to USC.

“USC’s facilities will continue to be an attraction for future Lightning stars.”

“Studying is a challenge, and fitting it in around a demanding training schedule can be tough, so I really commend USC for the program,” she said.

“Having support available, flexible study options and some extra advice can make all the difference for an elite athlete.

“I’ve always been encouraged to make sure I have career and study goals outside of netball, and that’s something I try to emphasise to the younger girls on the team now.” 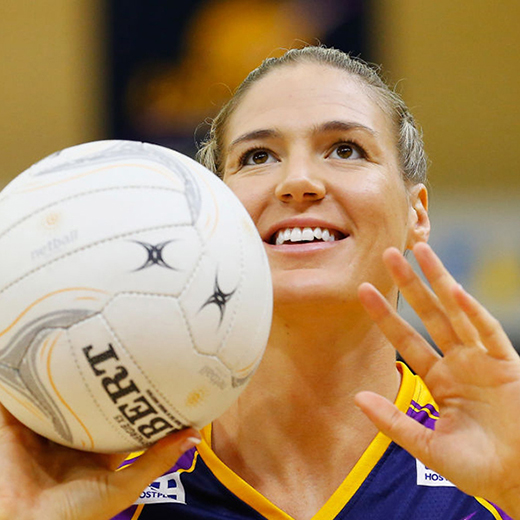