USC’s ground-breaking support for athletes with a disability has been boosted this year by three new $20,000 scholarships for para-athletes provided by the June Canavan Foundation.

The athletes will study under USC’s SEEDS (Sports Elite and Education Dual Stream) program, which enables athletes with a disability to combine tertiary studies with high-performance training and coaching at USC's state-of-the-art sports facilities.

The scholarships will be officially announced at a special presentation at the USC Stadium tomorrow (Tuesday 28 March) from 10.30-11am. Media are invited to attend.

The event will also include the presentation of the USC SEEDS Excellence Scholarship ($2,500 per semester) to Australian wheelchair basketball athlete Hannah Dodd, while Occupational Therapy student Brooke Molinero will receive of the USC SEEDS Coaching Award ($500).

Hannah, who also represented Australia in equestrian at the 2012 Paralympic Games, recently moved to USC from Sydney to study a Bachelor of Health Science (Prosthetics and Orthotics) under SEEDS.

“I love the personalised training on and off the court, as well as the support the program provides for my second undergraduate degree,” Hannah said.

“The modern architecture of the campus and the accessibility is great. The course coordinators and tutors have all been really accommodating with adjustments to classes and assessments so that I can participate fully in both sport and study.”

The June Canavan Foundation was established to honour the memory of Sunshine Coast sports medicine specialist Dr June Canavan, who died tragically in a plane crash in 2009.

Primary Education student Kyle Bridgwood, who is a two-time winner of USC’s Sportsperson of the Year award, won silver medals in both the time trial and track pursuit events at the 2016 Rio Paralympics. 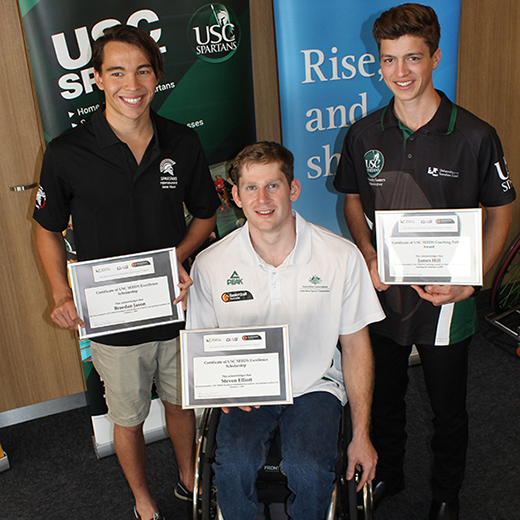