Mr McLean conducted in-depth workshops with former Socceroo captains, English Premier League players and professional-level coaches as part of his PhD study to develop an improved set of methods to describe the complexities of football performance.

He found that traditional performance measures, such as a pass counts or success rates, did not provide coaches with meaningful indications of their teams’ performances and that more dynamic factors needed to be measured.

Mr McLean’s paper on his findings, titled ‘What’s in a Game? – A systems approach to enhancing performance analysis in football’, has been viewed thousands of times since it was published on the Plos One journal website recently.

“Something like a tackle count or metres run describes what happens in a game, but doesn’t tell us how or why,” Mr McLean said.

“These are whole new lines of analysis. In measuring communication, for instance, we’re looking at not just the amount of talk on the pitch, but also non-verbal communications like pointing or the way they shape their body.

The new performance measures are now being used as part of a research partnership between USC and an A-League football club.

Mr McLean said the participation of some of Australia’s best-known football figures had been a crucial part of the project.

“Most major clubs now have in-house performance analysts and these kinds of measures will give them indications that they can build selection and coaching practices on. From my own personal perspective, it’s already improved me as a coach.”

“Most existing analysis methods only look at parts in isolation or the interactions between a limited number of them,” he said.

“Without appropriate analysis methods, it is impossible to understand how all these parts interact to create good or bad performance.” 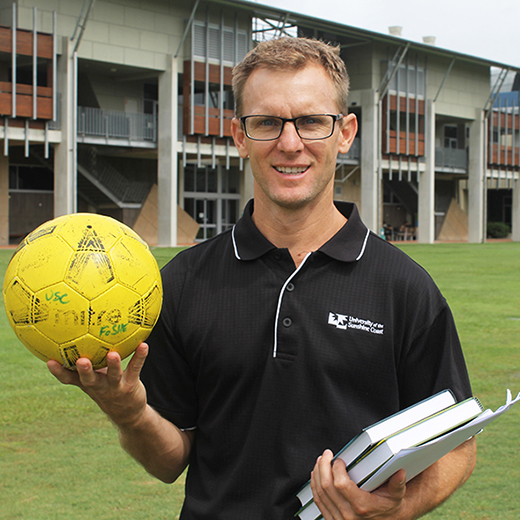