Dozens of USC students, staff and graduates are set to take performance to the people across the Sunshine Coast when the Anywhere Theatre Festival begins tomorrow, Thursday 4 May.

The three-week state-wide festival will feature performances of plays, music, poetry and cabaret that take place in a range of unusual settings around the region, including two shows at USC’s main campus at Sippy Downs.

USC sessional academic and graduate Nycole Prowse and USC graduate Toni Wills are coordinating the Sunshine Coast program, which will include 21 performances – nearly all of which feature USC students or graduates.

“The idea of the festival is to perform anywhere but a theatre, and exhibit art anywhere but an art gallery,” Dr Prowse said. “It’s about making culture more accessible, creating new audiences, and exploring our beautiful region.

“It’s the perfect festival for our USC students, and some recent graduates, as it takes down the barriers that come with producing a show in a traditional theatre environment.

“I think nearly every show has a link to USC, and we have some fantastic creative professionals, from the Sunshine Coast and beyond, who have come on board to mentor these young performers.”

Ms Wills, who recently completed a Masters of Creative Arts at USC, said the Sunshine Coast program was the largest regional contribution to the festival and audiences could expect to see ground-breaking creative works.

“For a lot of the artists, I think it will be the first step towards bigger things,” she said. “The USC students and graduates involved in Anywhere are bringing a real energy to the festival.

“There are venues as diverse as pubs, cafes, town halls, and private homes.

“Sometimes it’s the smaller, more intimate performances that resonate with you, because they’re unique and memorable.”

Shows at USC include the ‘The One Room of the House’, a play produced by USC student group Ursa Major that will take the audience to various locations across the campus on 6 and 7 May.

Renowned cellist Louse King will also perform a range of classic works, accompanied by piano, at the USC Gallery on 20 May.

For tickets and more information, go to anywheretheatre.com. 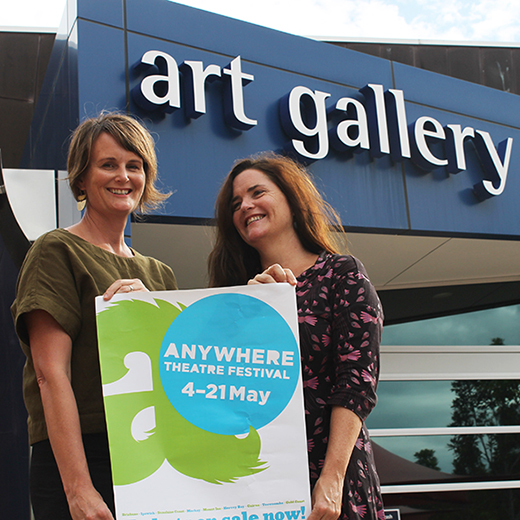