A USC PhD student has embarked on a major research project aimed at protecting Fraser Island’s unique ecology from the impacts caused by tens of thousands of visitor vehicles each year.

Maroochydore resident Ross Waldron, 40, will spend the next three years exploring the best ways to reduce the effects of traffic on Fraser Island, which may include creative solutions such as light rail, cable car, and specially engineered roads.

His research is being supported by a $100,000 scholarship from the Fraser Island Defenders Organisation (FIDO), which decided to fund a PhD scholarship at USC after receiving a generous bequest from passionate environmentalist Barbara Winkley.

Mr Waldron said the sheer number of visitors to Fraser Island – thought to number around 350,000 annually – was having a negative impact on the island’s natural environment.

“It’s got a huge range of ecological diversity, with a variety of forest types and ecosystems, as well as some of the purest fresh water lakes in the world,” he said.

“Tourists may not realise how driving across Fraser can affect its environment. It displaces a lot of sand, which can leak towards the lakes, causing vegetation changes and promoting the spread of weeds.

“In the first phase of my research, I’ll be trying to grasp an idea of the impact that vehicles are having, and then I’ll be looking at creative, workable solutions to minimise the harm.”

Mr Waldron said he was looking forward to working closely with the traditional custodians of the island, the Butchulla people, as well as the Queensland Parks and Wildlife Service and members of FIDO.

FIDO founder John Sinclair, who last week became an Honorary Doctorate of USC, said the organisation was eagerly anticipating the findings from the three-year project.

“We were very pleased to fund this important research,” he said. “This is an issue that requires someone to really apply themselves and their intellect to all the possibilities.”

Information on how to study at USC in 2018 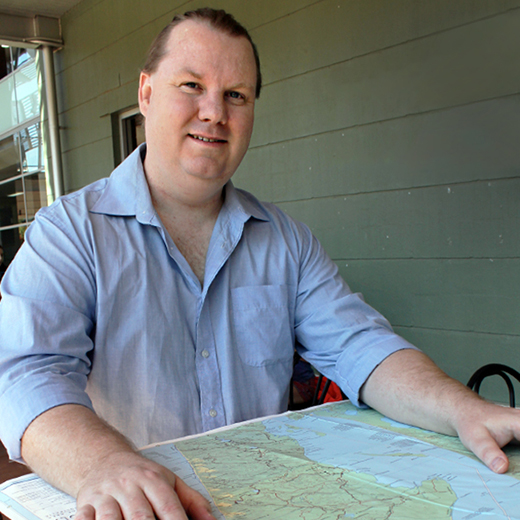 A new interpretive centre will open on K’gari (Fraser Island) next week to help increase understanding, appreciation and conservation of the world’s largest sand island.