A quest for a rewarding new career and a fascination for Fraser Island were the catalysts for a remarkable life change for international USC student Ghiuwon Kim from South Korea.

The 38-year-old quit a high-level managerial role in South Korea’s aeronautical industry to begin a Bachelor of Nursing Science this year at USC’s Fraser Coast campus.

“Work demands were impacting on my health and family, so I came to Australia to find the meaning of life and a career that best suits my interests,” said Mr Kim, who managed the production of aircraft fuselage panels and wing parts for Airbus assembly lines.

He said that with Fraser Island on its doorstep, USC’s Hervey Bay campus was his first choice when choosing an Australian university.

“I discovered Fraser Island 10 years ago on a working holiday, while driving up the east coast of Australia in an old Ford with my girlfriend, who is now my wife,” he said.

“I knew I wanted to return to Australia, where I had some of my happiest moments and met the love of my life, and live close to Fraser Island.”

Mr Kim was unsure about which degree to choose until an Australian friend suggested nursing as a career.

“It was an enlightening moment as I realised my greatest strengths as an employee aligned with some of the demands of nursing,” said Mr Kim, who trained as an air traffic controller and airline dispatcher while completing a Science degree at Korea’s Aerospace University.

He had also served as navy liaison officer between the Republic of Korea and the US Marine Corps before moving into aeronautical manufacturing.

“During my working life, I improved performances by identifying people’s needs, meeting stakeholders’ requirements and eliminating the root causes of problems,” he said.

“Nursing is a massive career change. I needed to let go everything I had achieved; however, I did not hesitate to make the decision.”

He said the small, friendly environment of USC Fraser Coast and the quiet regional location of Hervey Bay was an important part of his international study experience.

“Being an international student here is great. My colleagues and USC staff are kind and eager to help with any issue. The people around me are always smiling and now I have a smile on my face at every moment.”

He hopes his wife and four-year old son will soon join him in Australia. “I believe they will also enjoy staying here and will ultimately find this journey as meaningful as I am finding it. 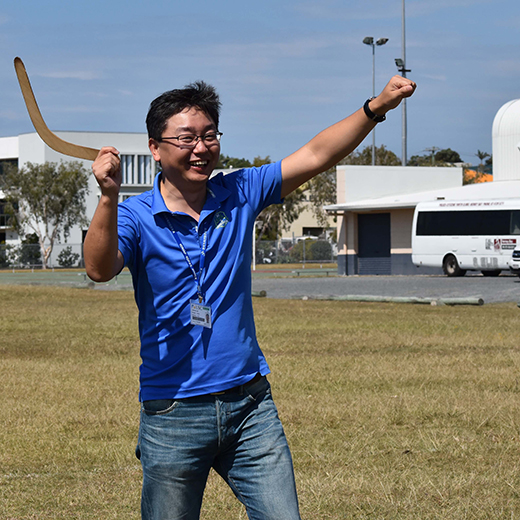