The local and global impacts of USC’s Sustainability Research Centre over the past decade have been outlined by its academics, research students and graduates, and partners in the community.

The centre recently marked its 10-year anniversary with its annual advisory board meeting and an alumni dinner for 70 people who travelled from as far as the United States.

Professor Preston is the Director of the Infrastructure Resilience and Environmental Policy Program at the RAND Corporation, a non-profit global policy think tank.

USC Professor of Sustainability Tim Smith, who was director of the centre from 2007 to 2017 when he handed over to USC Professor of Geography Roy Sidle, said students and staff had travelled to environments across the globe, from Mooloolaba Beach to the Equator to the Arctic Circle.

“Our goal remains to help regions transition towards sustainability,” he said. “We focus on understanding the relationships between people, place and change, using collaborations and multiple disciplines such as human geography and environmental management.

“In the past 10 years, the SRC has generated $7 million in external research income to the local region, produced 500 research publications and graduated 26 PhD students. It leads USC’s sustainability-related teaching programs.”

Alumni at the function included Dr Michael Duggan, of Brisbane, who recently became Chief Operating Officer of Eco Fuel Innovations after working as Director of Risk Advisory in Sustainability Services at Deloitte Australia. The 2016 PhD graduate examined how to facilitate effective sustainability education across the globe. 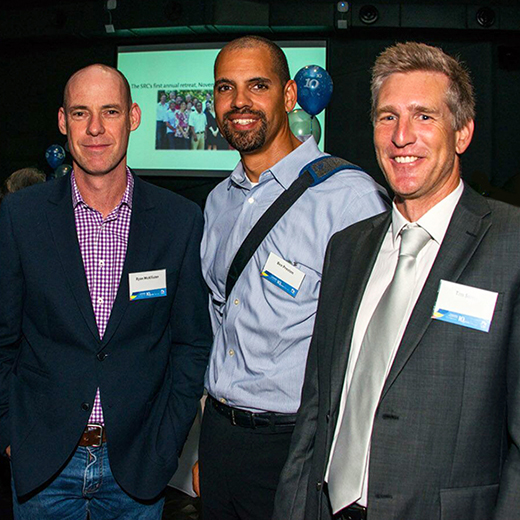