Wurtulla father-of-two Tony Hunkin has overcome serious injuries from a cycling accident to become the first USC Law School graduate to be admitted to the Supreme Court of Queensland.

The former pharmacist, who graduated from a USC Bachelor of Laws (Graduate Entry) earlier this year, signed his admission papers in front of his family and peers at a special ceremony at the court recently.

It was a major milestone for 45-year-old Mr Hunkin, who had enrolled in USC Law School’s first cohort after running his own pharmacy at Maroochydore for 20 years.

Mr Hunkin, who is currently working for Sunshine Coast law firm Garland Waddington Solicitors, is now authorised to practise as a lawyer anywhere in Australia.

He said that his admission ceremony, which followed a 16-week postgraduate Practical Legal Training course, had been particularly satisfying after having overcome a number of obstacles during his degree.

“There was certainly a lot of ups and downs on my way to being admitted,” he said. “In October of my second year of studies, I broke my neck and back in a cycling accident, and I was in a halo brace for nine weeks.

“It was a lot to recover from, but my lecturers were very supportive, letting me defer my assessments. I had to do my exams orally, as I wasn’t even able to write.

“It feels great to have started this new phase, being able to practise completely independently as a lawyer. I’m looking forward to building my career in commercial and property law.”

Mr Hunkin said taking the plunge into a new career path by enrolling in Law at USC had quickly proved to be one of the best decisions he had ever made.

“I was ready for a complete change in my life,” he said. “Studying Law was a really good positive mental experience to test my brain, and I started to thrive on the subject matter.

“I was confident that this was the new path for me, and I ended up selling my pharmacy in my second year at uni. The learning environment at USC was great, and I was able to relate really well to my lecturers and tutors.” 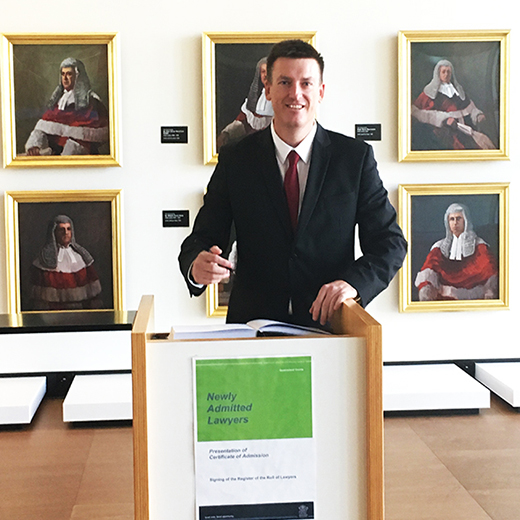