A USC Arts/Business student from Nambour who gained high-level work experience in South Korea and Fiji after he was awarded an Australian Government New Colombo Plan (NCP) Scholarship has been named the University’s alumni ambassador for the national program.

Caleb Mattiske, 21, said he was honoured and excited to be chosen to share with USC students and the Sunshine Coast community the value of the Department of Foreign Affairs and Trade’s NCP program, which is strengthening links between Australia and the Indo-Pacific region.

The voluntary role will involve engaging with the University and wider community to promote the program and the value of regional study experiences.

“I had an amazing year abroad in 2016 – studying, gaining experience, making work connections – and I feel incredibly lucky to be part of the program and to share my experiences,” said Caleb, whose scholarship was worth up to $67,000.

He attended a semester at Konkuk University in South Korea before participating in a three-month business internship at the Australian Chamber of Commerce in Seoul.

He then flew to Fiji for a second three-month internship at the International Union for Conservation of Nature (IUCN) Oceania regional office.

“I worked mostly in communications roles, meeting executives and professionals from two international organisations, assisting their operations, engaging with their clients,” he said.

“In Seoul, for example, I helped facilitate a seminar on the incoming new anti-bribery legislation. With IUCN, I took part in the organisation’s World Conservation Congress in Hawaii where 10,000 delegates discussed pressing environmental issues.

“I was able to combine my interests in business and geography while getting insights into how important the Indo-Pacific region is to Australia’s future.”

Caleb, who also joined a sustainable tourism research trip to Cambodia after receiving an NCP Mobility Grant earlier in his USC degree, said he was looking forward to shaping a career around further engagement with Australia’s neighbours.

USC currently has two students on NCP Scholarships overseas, and the Australian Government recently announced its support for a further 162 USC students to participate in 10 NCP Mobility projects across the Indo-Pacific in 2018.

The Mobility projects will include 30 environmental and wildlife management students doing fieldwork in the Bornean jungle to map unique flora and fauna. The students will gain Indigenous knowledge from the Iban people in Brunei Darussalam. 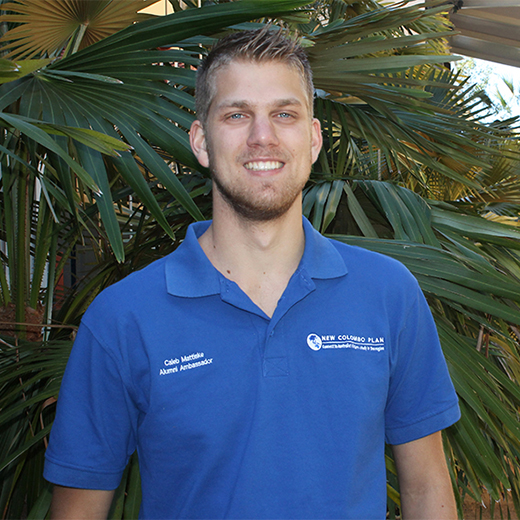