Whether it’s the sports field, the classroom or the boardroom, the formula to success is the same, according to netball supercoach Noeline Taurua, who will address USC Fraser Coast’s inaugural graduation ceremony on Thursday.

The head coach of USC-based Sunshine Coast Lightning and former New Zealand international player has a proven record in creating a winning culture both on and off the court, and a knack for lifting individual performances.

Ms Taurua who led the Lightning to victory in its first season in the national competition has just finished cheering on four of her charges at the Commonwealth Games, including Lightning captain Geva Mentor who helped England win gold against Australia.

“I thought Geva was a standout for England, while Caitlin Bassett and Stephanie Wood were both dominant in the shooting positions for Australia, as was Karla Pretorius for South Africa,” she said.

“The best thing when watching these players play against each other was that they competed hard. We expect this behaviour in our training environment, and I suspect pushing each other also helped them to be dominant international players.

“You need to be dedicated to be the best you can be, and in so doing, you help others to be the same.”

Ms Taurua will share her advice on translating this philosophy from the sporting arena to careers and life in general with the first cohort of graduating students from USC’s Fraser Coast campus.

The milestone graduation ceremony, which the Fraser Coast community has been invited to attend, will focus on the achievements of the 14 students who will graduate with degrees in Nursing Science, Marketing and Human Services.

“There is never anything easy about being disciplined, having to work hard and finding new ways of being innovative and creative,” Ms Taurua said.

“Sometimes measuring success is not necessarily the tangible result but the journey you have endured to get there.”

Also sharing her inspiration and her educational journey will be Hervey Bay’s Elyse Bone, who has been chosen to present the graduate address at the ceremony.

Ms Bone is working with the Wide Bay Hospital and Health Service and is one of many graduating students working locally in the health sector and giving back directly to their community. 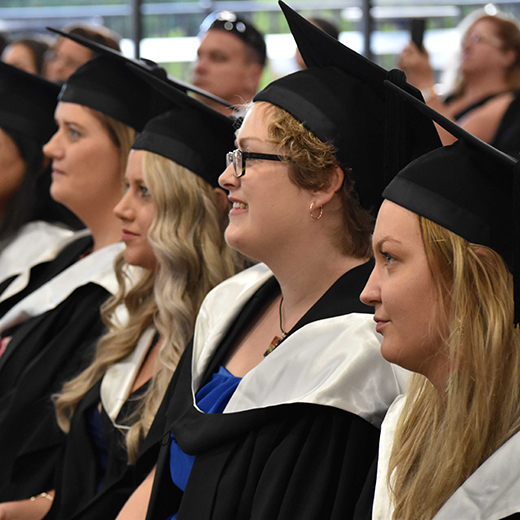