Swimming guru is UniSport Coach of the Year - University of the Sunshine Coast, Queensland, Australia

Doyle said the advice he received from Cameron, who passed away in April, had contributed greatly to his continued success as a coach. Doyle took over from Cameron at the Spartans in early 2017 when his predecessor became Australia’s National Para Sport Mentor Coach.

The UniSport Australia award recognises Doyle’s stellar year, which included the Spartans being named the nation’s champion club at the 2018 Australian Swimming Trials Championships in March.

Doyle’s athletes went on to win two silver and three bronze medals at the Commonwealth Games on the Gold Coast in April, and a further 22 medals at the 2018 Pan Pacific Para Swimming Championships in Cairns in August. Doyle also took out the Coach of the Meet for his performances at the championships.

“This recognition from Unisport Australia is fantastic,” he said. “It’s a testament to the program that we have here at USC in High Performance Sport that lets me do what I do.

“A lot of people have played a role in what I do, especially my coaching partner Chris Mooney, Brendan Burkett (USC Director of High Performance Sport), Mark McKean (USC strength and conditioning coach), Danielle Formosa (Swimming Australia sport scientist), and Jan Cameron for the mentoring she provided to me over the past few years.

“I attribute this award to the work that Jan did with me.”

Doyle’s success in the Australian Unisport awards follows USC education student Jordan Mercer winning the Most Outstanding Sporting Achievement of the Year award in 2017 for her efforts in paddleboarding and surf lifesaving. 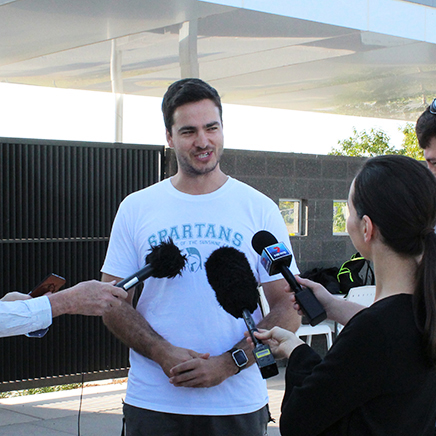