It is the top invertebrate predator and fastest crustacean on the beach, and now the ingenuity of the ghost crab has been revealed to the world by USC researchers.

A study into the ghost crab (Ocypodinae) has found that it uses its burrow as a charging station for its body heat, and that the depth of its home functions like a finely-tuned thermostat.

The findings, published in the latest edition of international journal Estuarine, Coastal and Shelf Science, were based on field studies of crabs on Sunshine Coast and Hervey Bay beaches.

Lead researcher, USC Lecturer in Science Dr Greg Watson, said the team used thermal cameras to measure the temperature of the shells of ghost crabs and the heat inside their network of burrows.

“We gained novel insights into the ability of the crab, which like other cold-blooded creatures relies on external heat to regulate its body temperature, to exploit its environment to ensure its survival,” Dr Watson said.

Temperatures at the beach surface vary dramatically between night and day, however the study found that the clever crustacean used the depth and gradient of its burrow to control its body heat.

Depth and gradient were also used to keep the temperature of the base of the burrow relatively constant.

“While we knew the crab uses its burrow to escape the sun’s heat and hide from predators during the day, our findings indicate the burrow also provides a buffering from cold temperatures at night and gives the crab ready access to a thermal energy source,” he said.

“As it carries out its nocturnal hunting and scavenging on the beach, it can keep visiting the base of burrow where it is warmer to rapidly recharge its body heat as it needs,” he said.

The heat generated by the burrow may potentially serve another useful purpose – acting like a front door light to guide the crab back home from its nightly scavenger hunts.

“Our findings suggest the crab may use the heat signature of the burrow entrance, or the odours rising from the burrow base, as navigation tools,” Dr Watson said.

Dr Watson, who lecturers in first-year Science at USC’s Fraser Coast campus, has a diverse range of teaching and research areas with papers published in chemistry, biological, physics, engineering, medical and teaching journals and books. 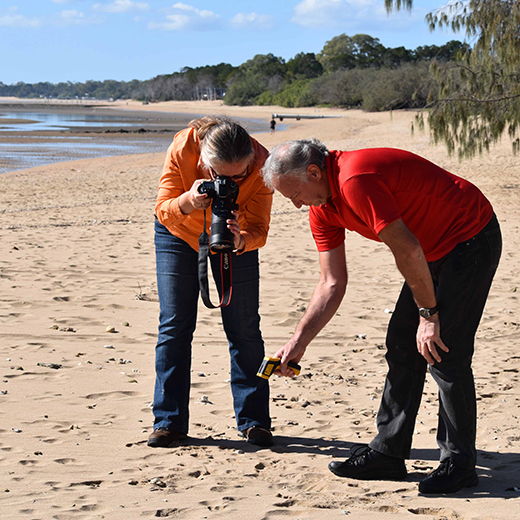