Liam Donovan, Sophie Rawlins, Nicola Beriman and Jai Kunze were successful as the prosecution in a fictional criminal trial of a man accused of stealing a watch in a department store.

They were judged the winners ahead of a plucky Chancellor State College defence team of Georgia Gillespie, Tess Barnsley, Maddi Thomson and Amy Turner, who put forward a strong argument to have the stealing charges dismissed.

The mock trial was presided over by Peter Gibson and Fiona Leddy of Shine Lawyers and Julian Porter of the Suncoast Community Legal Centre and was held in USC’s moot court – a purpose-built facility with the look and feel of a real courtroom.

The Immanuel College team received a $500 prize, donated by Sunshine Coast Grammar School, while Chancellor College gained the runners-up prize of $400, donated by Shine Lawyers, and a best written submissions prize of a $100 voucher from Play Sportswear.

The best speaker prize of a legal textbook from LexisNexis was awarded to Sophie Rawlins.

USC Lecturer in Law Dr Dominique Moritz congratulated both teams on their success in the competition run by USC and Sunshine Coast Grammar School for Year 11 and 12 Legal Studies students from schools across the region.

“The standard of competition was exceptional, so these two teams did an outstanding job to make it to the grand final,” she said. “Mooting requires a huge amount of preparation, commitment and courage and both teams excelled. They should be very proud of their achievements.”

Dr Moritz said mooting taught Legal Studies students valuable skills that were transferable to other aspects of their lives.

“Mooting allows students to engage with interesting and topical legal issues, enhance advocacy and writing skills, and collaborate with peers. It is a fun and challenging activity,” she said.

Dr Moritz thanked all the local legal practitioners, academics and USC Law students who volunteered as judges throughout the competition rounds and finals.

“Not only did they judge the moots, but they read the preparation material and provided detailed feedback to all teams, which was time-consuming. The competition would not have run without them and I am grateful for their support.” 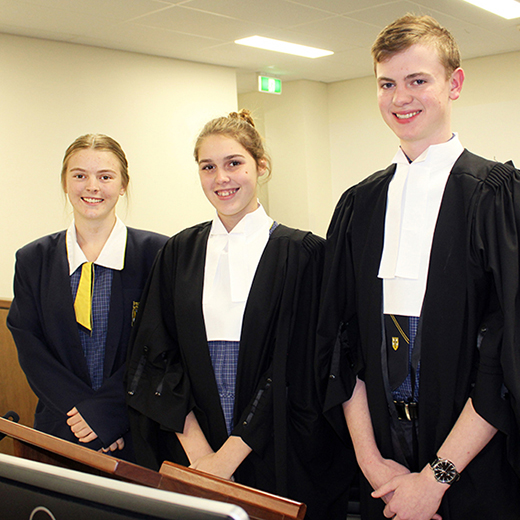