It is a concept the new USC Executive Master of Business Administration graduate uses to draw more than 1,000 listeners worldwide to his Coffee Chats podcast and radio show which broadcasts to more than 30 countries.

Mr Collins is now utilising the skills he gained through the EMBA to expand the reach of his media platform.

“The radio show has enjoyed many potential business opportunities which would not have happened without the EMBA, including the skills to approach and negotiate a deal with global business network,” he said.

Every week over a cup of coffee, he interviews high-profile sportspeople, artists and performers and also shares the extraordinary stories of an eclectic mix of everyday people.

“I like conversations that challenge me, inspire me and make me think – and I like coffee, so it is a perfect combination,” said Mr Collins whose interviews are broadcast on South Burnett’s Crow FM and published in a regular lifestyle column in the South Burnett Times.

His guests have included a double amputee, a former gang member turned motivational speaker, an ex-police negotiator and a couple sharing insights into their open marriage.

It was a case of ‘third time lucky’ when the 38-year old, who balances his media work with a senior managerial job in an employment service, graduated from USC last month.

The long-time Sunshine Coast resident, who moved to the South Burnett over a year ago with his partner and children, first enrolled in a Science degree at USC 21 years earlier.

“I realised that I wasn’t yet ready for university and left in my first-year to work in the fitness industry, eventually establishing a number of gyms on the Sunshine Coast,” he said.

He later enrolled in USC’s Bachelor of Exercise Science before business demands made it difficult to complete his studies. Later selling his gyms, he moved into management roles, with the thought of gaining tertiary qualifications never far from his mind.

“I always knew going back to university and graduating was important to me and USC’s Executive Master of Business Administration seemed like a good match for me,” he said.

Designed for senior managers wanting to sharpen their business skills, the program is delivered through intensive coursework one weekend a month for two years.
“I chose USC because of it offered dynamic group discussions on ideas and opportunities with other like-minded business professionals,” he said.

“It's a great feeling to be finally graduating. It seems like a lifetime since I first enrolled at USC the year after it first opened.

“Next on the agenda is gaining a degree in psychology. Hopefully it doesn't take another 21 years to graduate again.”

USC’s annual Open Day will be held at its Sunshine Coast campus on Sunday 22 July. 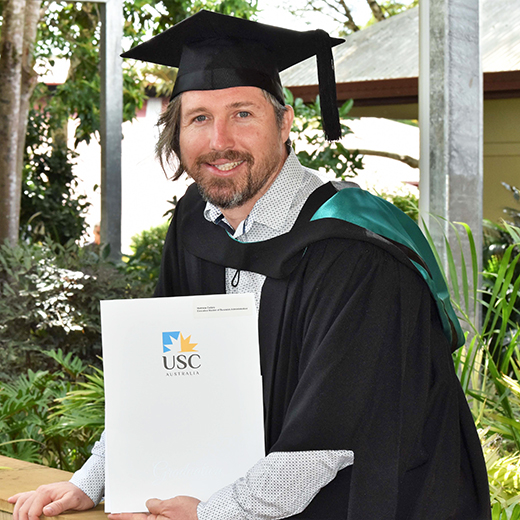