Growing up in Norway, Sara Ismar always dreamed of studying on the Sunshine Coast – and now she has taken that a step further by securing her dream job here.

The Maroochydore 23-year-old recently started as a social media assistant for Visit Sunshine Coast, promoting the region to the rest of the world, and she was offered the job two days before graduating from USC.

“I just pinch myself every day about living here, and that’s a feeling I can convey to people who have never been to this place,” Sara said.

“I think that’s what made me do so well at uni, loving where I live, getting up in the morning to surf, and living in an environment where I feel I can thrive.”

Sara graduated from USC recently with a Bachelor of Business (Marketing) with a near-perfect GPA score of 6.87 and a University Medal for Academic Excellence while her parents watched the graduation live stream from Norway at 4am their time.

“Mum called me just squealing with happiness,” she said.

“I grew up in Norway but my dad is from Queensland and, when I was 10, I went to Mooloolaba State School for a year. After that year I was just obsessed. Every school presentation in Norway was about the Sunshine Coast.”

“I told my parents I’m going to study on the Sunshine Coast, even though education is free in Norway. I was just so certain I would really enjoy studying in Australia.”

Since making the move, four fellow Norwegians have followed in her footsteps.

Sara says when she finished her course in November, she wrote a list of organisations she’d like to work for on the Coast, fearing she would have to look to the city for a graduate position.

“I was so excited when the job appeared, and when I was on the bus home from the interview they rang to let me know I had the job.”

“There is a lot of development and heaps of people moving here. I think it’s a really exciting time to graduate now on the Sunshine Coast,” Sara said. 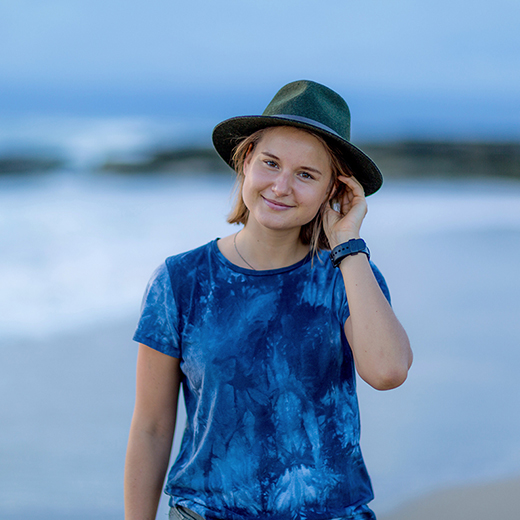