Stadium redevelopment will be a game changer - University of the Sunshine Coast, Queensland, Australia

Stadium redevelopment will be a game changer

USC Stadium is set to welcome larger crowds than ever before, with USC and Sunshine Coast Lightning today announcing the start of work on a new-look sporting and community facility.

“The upgrade will see the eastern side of the stadium extended, improving accessibility and delivering a more positive experience for visitors,” Professor Hill said.

“In addition to the increased spectator seating, the extension will incorporate new athlete change rooms, a multi-purpose function room, dedicated seating for people with a disability as well as various new and improved operational facilities.

“A new sound system is also being installed, and the addition of new public bathrooms will minimise the need to hire temporary facilities for major events.”

Professor Hill said Sunshine Coast construction company Evans Built had been appointed and preliminary work had begun on the redevelopment, which is being funded by the Queensland Government.

“Our vision is to develop USC Stadium into a national-standard venue that plays host to a variety of sporting and cultural events and is a preferred training venue for national netball and basketball programs,” he said.

“The Club has sold out every home game since its inception and given some fans have missed out on tickets to past matches, we’re excited to be able to provide more people with the opportunity to attend live games at Lightning HQ.

“With construction scheduled for completion in May 2019 and the Suncorp Super Netball season kicking off in late April, we are currently working with Netball Australia to schedule most of Lightning’s home games after the redevelopment is completed.

“We will announce the date of our first 2019 game at USC Stadium once the Suncorp Super Netball fixture is finalised next month.

“We are thrilled to have arguably the most loyal, enthusiastic and vocal supporters in the league and we can’t wait to hear them cheering loud and proud in the upgraded stadium.” 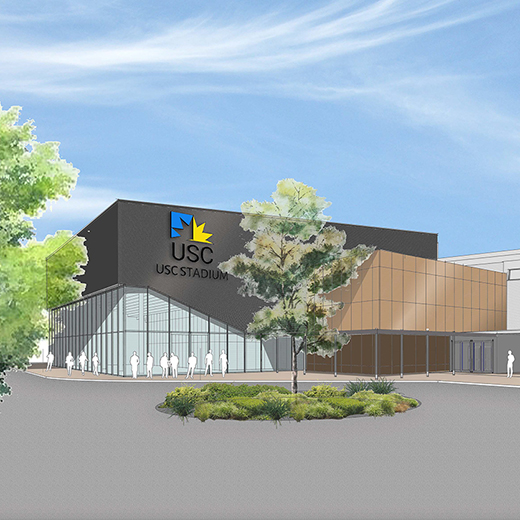