The award recognises Aunty Lillian, President of Cooloola Aboriginal Service, for her efforts to actively promote the benefits of further education to Gympie’s Indigenous community.

Over the past decade, she has worked with Aboriginal youth and volunteered with up to 100 advisory boards, committees and consultancy groups on a range of Indigenous issues, including Fraser Island's Indigenous Advisory Committee.

Her inspiring work as a community leader has earned her several accolades, including a Volunteering Queensland Lifetime Contribution to Volunteering Award.

A descendant of the Butchulla people with links to Kabi Kabi people, Aunty Lillian experienced a childhood of extreme disadvantage as part of the Stolen Generation.

She was born in Cherbourg, a small town located 250km north-west of Brisbane, and has lived in Gympie since 1999.

“Aunty Lillian is a worthy recipient of the honorary award of Senior Fellow in recognition of her significant contribution to encouraging Indigenous participation in higher education within the Gympie region,” he said. 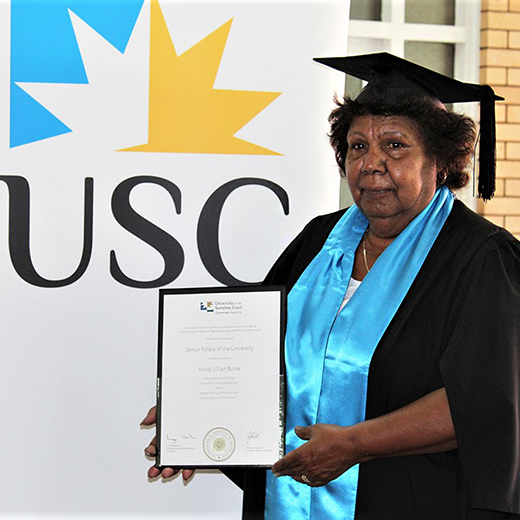