Cutting-edge genetic research into changing the sex of rock lobsters could hold the key to a PhD graduate from the University of the Sunshine Coast helping find a cure for a deadly children’s kidney disease.

Dr Jennifer Chandler is working as a Research Associate at the prestigious University College of London’s Institute of Child Health after completing a PhD at USC earlier this year investigating sexual development in the Eastern rock lobster.

In a world-first discovery, Dr Chandler identified the sex-determining gene in the lobster as part of her research.

Now the 26-year-old is using gene therapy techniques refined during her study to shape her approach to investigating the genetics of kidney disease.

Dr Chandler is part of a team seeking to use gene therapy to treat Nephrotic Syndrome, the most common cause of the potentially fatal glomerular disease that affects the kidney’s ability to properly filter blood, waste and excess water.

“In severe cases of the disease where the recommended treatment using corticosteroids has little effect, around 50 percent of children will have end-stage renal failure within 10 years,” Dr Chandler said.

The syndrome is associated with a novel mutation in a gene called NOP10 that is found in every cell of the body and is central to major cell functions, such as protein building and protecting the degradation of genetic data during cell replication.

“We want to determine how this gene mutation is causing glomerular disease, which could allow us to treat or prevent the disease at its cause by replacing or rebalancing any mutated gene,” Dr Chandler said.

“I worked to achieve a similar aim in my PhD, using gene therapy to manipulate the expression of a gene to make a lobster male or female to boost its future sustainability.

“My current research is using molecular biology skills that I learned during my PhD and the same modelling methods to predict binding interactions with the NOP10 human protein that I used with the lobster proteins.”

Dr Chandler has returned to the Sunshine Coast to receive her PhD at a USC graduation ceremony on 27 September. On Wednesday 19 September she will showcase her research outcomes at a seminar, followed by a guest lecture and presentation to students in USC’s visualisation studio.

The unusual combination of kangaroos and crustaceans led to Dr Chandler moving from the UK to the Sunshine Coast in 2013 after she graduated with first-class Honours in Biology and Animal Behaviour from the University of Exeter.

“USC offered the opportunity to study a native species in Australia and to work at USC’s GeneCology Research Centre with supervisor Dr Tomer Ventura and Professor Abigail Elizur, who are world experts in crustacean sexual development,” she said.

“The kangaroos on campus made it hard to resist too,” she said.

Dr Ventura, who pioneered the application of gene silencing to induce fully functional sex change in crustaceans, said Dr Chandler made many novel discoveries during her PhD and gained international recognition for her research.

“Jennie is a talented early career researcher, poised to become a leader in any field she chooses to focus on. She is truly a shining star and her academic journey will be a source of inspiration for many Higher Degree by Research students at USC,” he said. 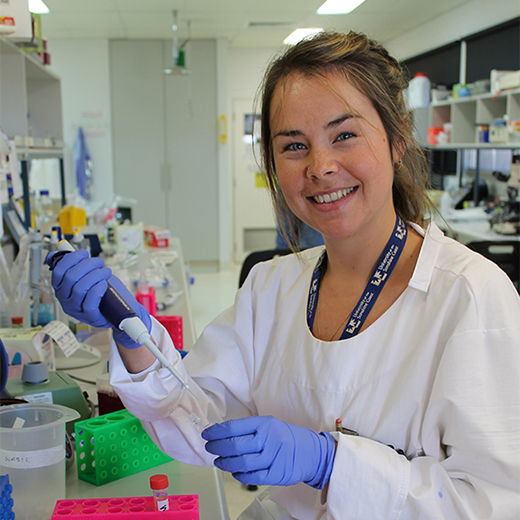