The impressive foundation building of the University of the Sunshine Coast’s new campus at Petrie is starting to take shape.

The foundation building, which will include a large lecture theatre, multi-purpose rooms, and a stunning open auditorium suitable for community events, has been designed to cater for rapid growth of the student population over the campus’s first three years.

USC Moreton Bay is planned to open in time for Semester 1, 2020. The first intake of students, expected to be as many as 1,200, will have a choice of almost 50 study programs including business, education and computer science.

Hansen Yuncken Queensland State Manager Greg Baumann said the company had constructed many iconic tertiary and school buildings throughout Australia and was bringing that expertise to the USC Moreton Bay foundation building project.

“Our understanding of university stakeholders and live environment construction has been built up over 100 years of operation,” he said.

“We have worked for more than 10 universities and many schools across Australia and have enjoyed repeat work with many institutions over an extended period. We are excited to commence piling works and look forward to working with USC and the project’s stakeholders to deliver an exceptional facility.”

Among the company’s recent projects are QUT’s Education Precinct Building at Kelvin Grove, The Cairns Institute at James Cook University, the Coomera Indoor Sports Centre, and the award-winning Gold Coast Sports and Leisure Centre constructed for the 2018 Commonwealth Games.

USC Vice-Chancellor Professor Greg Hill said it was thrilling to see USC Moreton Bay begin to take shape as the campus will be a game-changer for the region, offering local residents unprecedented access to tertiary education.

“Moreton Bay is one of Queensland’s fastest growing regions, but has been the only region of its size in Australia without its own full-service university campus,” Professor Hill said.

Professor Hill said USC already had a strong connection with Moreton Bay, with more than 1,000 new students from the region starting at the University’s campuses on the Sunshine Coast and Caboolture this year.

Moreton Bay Region Mayor Allan Sutherland said the start of work on the campus was history in the making.

“There’s been a lot of talk about how this project will change our communities, economy and educational outcomes,” he said. “Now I think that excitement will really start to filter through our community as a vision starts to become a reality.

“In less than two years this building will be complete and its doors will be open to the first intake of USC students right here in Petrie, which is just incredible.

“Given there hasn’t been a new greenfield university campus opened in Australia in about 15 years, the eyes of the education world will certainly be looking at us and I expect significant investment to follow.”

USC last year secured a $121million loan from the Commonwealth Government for stage one of the campus, which will become the centrepiece of Moreton Bay Regional Council’s ‘The Mill at Moreton Bay’ development. The campus is tipped to reach a student population of 10,000 by 2030. 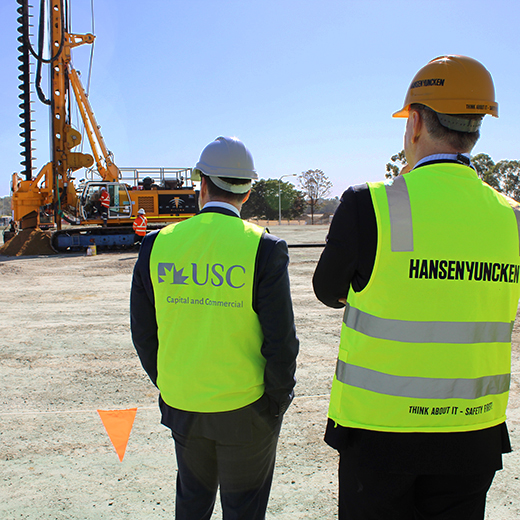 Scholarships to make a difference for Moreton Bay students