The surf lifesavers, who make up the largest proportion of athletes involved in USC’s High Performance Student Athlete program, returned from the Gold Coast earlier this month with luggage bulging with gold, silver and bronze.

In a field of many stars, 18-year-old Elli Halliday, from Alexandra Headland Surf Life Saving Club, stood out after winning gold in the under 19 surf race, belt race, and Taplin relay.

The first-year Bachelor of Dietetics student also finished fifth in the under 19 ironman and second in the open surf teams event.

Like many students, Halliday has to juggle study with a full-time training load, but is pleased with how her year has begun in both areas.

“Things are going really well so far,” she said. “I love what I am learning and my lecturers are great in taking my sport into consideration. At Aussies I did considerably well.”

Another highlight for the USC contingent was Bachelor of Primary Education student Jordan Mercer’s performance in winning bronze in the Open single ski event.

It was the Noosa Heads lifesaver’s first competition since injuring her foot in the Ocean 6 series Ironwoman event at Coolum in late 2018.

USC’s Director of High Performance Sport Professor Brendan Burkett said while swimming, netball and cycling had become synonymous with sporting excellence at USC, surf lifesaving was leading the charge in terms of the number of student athletes involved.

“Surf lifesavers make up the biggest proportion of our high performance program with the number of youth age group athletes almost doubling over the last two years,” he said. “It is great that they are choosing to stay on the Coast and study at USC, and we love watching them perform each year at Aussies. They have all done incredibly well.”

Now in its third year, USC’s High Performance Student Athlete program was developed to support athletes competing at a national or international level to achieve both their sporting and tertiary education goals simultaneously.

Members receive expert support in sport and exercise science, athletic development, and access to USC Sport facilities, as well as support for learning and academic flexibility so they can improve in their sport while they also achieve in higher education.

Most of the USC surf lifesavers are members of Alexandra Headland, Noosa, Maroochydore and Dicky Beach clubs, with some relocating from Mermaid Beach on the Gold Coast and from interstate clubs such as Byron Bay, Yamba, and Jan Juc.

While they share a love of their sport, they differ markedly in what they choose to study. They are pursuing 21 different degree programs ranging from Biomedical Science to Creative Industries, with the more popular fields of study being Education, Nursing Science, Dietetics, Occupational Therapy, Sport and Exercise Science, and Business. 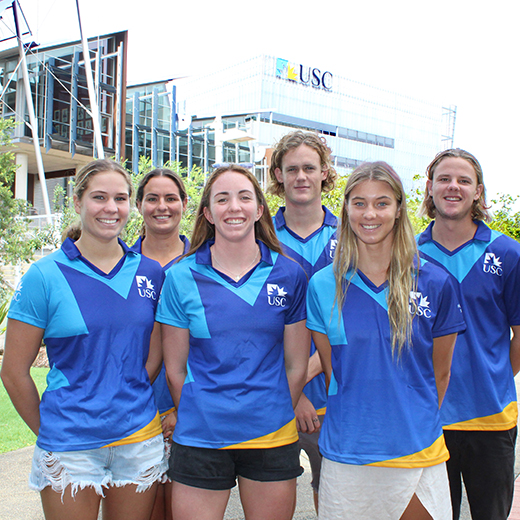