Health researchers from the University of the Sunshine Coast say aberrant postures have led to an increase in young people developing a bone growth at the back of the skull.

Research published by Dr David Shahar and Associate Professor Mark Sayers in the Journal of Anatomy in 2016 has attracted increased attention since the BBC wrote about this phenomenon in the recent article How modern life is transforming the human skeleton.

The study involved 218 X-rays of people aged between 18 and 30-years-old on the Sunshine Coast in Australia and found that 41 percent had developed a 10 to 30 millimetre bony lump at the back of their skull.

Dr Shahar, who was completing his PhD at USC at the time of the study, says the large bony growths were once exclusive to older patients, as they resulted from long-term load on the skeleton, so was surprised to find many of the growths in younger people.

“This is evidence that musculoskeletal degenerative processes can start and progress silently from an early age,” Dr Shahar said.

“These findings were surprising because typically they take years to develop and are more likely to be seen in the ageing population.”

“It is important to understand that, in most cases, bone spurs measure a few single millimetres and yet we found projections of 10 to 30 millimetres in the studied young population.”

Further testing including MRI scans and blood testing ruled out the possibility that the growths were the result of genetic factors or inflammation.

Dr Shahar said the findings offered a warning about “the early and silent development of bone and joint damage due to poor posture” and highlighted the need for prevention intervention through posture modification when using hand-held technologies.

“We hypothesise that the sustained increase load at that muscle attachment is due to the weight of the head shifting forward with the use of modern technologies for long periods of time,” Dr Shahar said.

“Shifting the head forwards results in the transfer of the head’s weight from the bones of the spine to the muscles at the back of the neck and head.”

“The increased load prompts remodelling on both the tendon and the bony ends of the attachment. The tendon’s footprint on the bone becomes wider to distribute the load on a larger surface area of the bone.”

Dr Sayers, who was Dr Shahar’s supervisor for the study, said the pair are still collaborating on research with plans to develop resources to help avoid the problem, particularly for school children.

“The thing is that the bump is not the problem, the bump is a sign of sustained terrible posture, which can be corrected quite simply,” Dr Sayers said.

He said the answer was to balance mobile phone use with recalibration of body posture, use specially contoured pillows or do exercises that involved lifting the upper chest.

A further study in 2018 by Dr Shahar and Dr Sayers published in Scientific Reports-Nature, showed that bone overgrowths at the back of the skulls were larger and more common with young adults that with the older population. 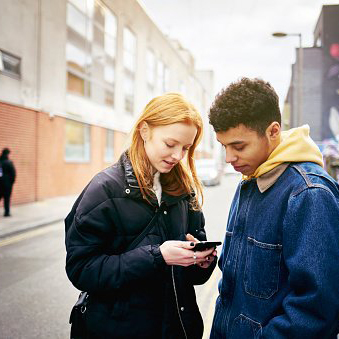