Surakshya Mishra graduated from USC earlier this month with a Bachelor of Nursing Science, three years after leaving her landlocked homeland for the beaches of Hervey Bay in pursuit of higher academic qualifications.

“My greatest achievements are my little girl and this degree,” said Surakshya, 27, who is working as a registered nurse in aged care.

“The three years have gone by so quickly that it feels like a blink of the eye, and there have been many ups and downs, just like being on a roller coaster,” she said.

When she chose USC Fraser Coast for her overseas study experience, Surakshya joined a small but growing number of international students at the campus, from countries such as Nepal, South Korea, South Africa and Germany.

Surakshya and Rashmi, 24, discovered they shared remarkably similar journeys when they met on their first day at USC’s Fraser Coast campus in July 2016.

Both had gained a Diploma of Nursing and had worked in hospitals in Kathmandu before a desire to advance their careers inspired them to study with USC. Their husbands also gave up careers in Nepal to accompany their wives to Australia.

Surakshya began her nursing career caring for babies in the intensive care unit of Nepal’s College of Medical Science before working as an assistant nurse with England’s National Health Service, while her husband completed a finance degree at the University of Wales.

“I then chose to study in Australia because its nursing education is considered one of the best in the world,” Surakshya said.

“I decided to enrol at USC because of the excellent standard of its Nursing Science degree, and I wanted to gain advanced practical experience in aged care and hospitals.”

Surakshya said being an international student so far from home had its challenging times, especially adapting to writing in academic English.

“I made it with the support of USC staff and my co-students, and my family’s belief which made me strong during the three years,” she said.

“Having a baby, studying full-time and working part-time was stressful at times, and it would not have been possible without my husband’s support and my mother-in-law, who came all the way from Nepal to support us and look after our baby.

“My dream to be nurse has come true but it’s just the start of my journey. I would like to develop my career in aged care as well as experiencing different aspects of nursing.” 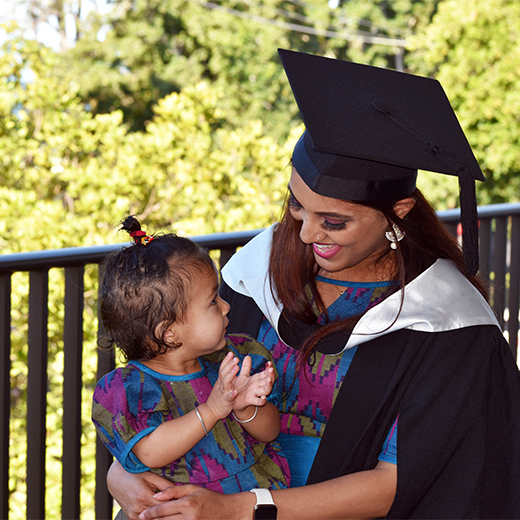