Dr Bonnie Holmes, who is involved in national collaborative research on large ocean predators such as tiger and hammerhead sharks, is one of the newest members of USC Fraser Coast’s Animal Ecology academic team.

“The Wide Bay region has some of the most productive waters in Australia right on our doorstep, but surprisingly little is known about the seasonal trends of certain species, or how they use the local habitats to feed and breed,” Dr Holmes said.

Sharks preying on fish caught on lines by recreational fishers was also a topical issue, and she plans to identify what species are responsible for these activities in waters off Hervey Bay and Bundaberg.

Much of Dr Holmes’ research is on the tiger shark, an apex predator who controls local food webs by preying on other marine creatures.

“These predators are extremely important to the ecology of the ocean, and the more we know about them, the greater steps we can take to protect shark species all while ensuring viable commercial and recreational fishing opportunities,” she said.

“As tiger sharks are sometimes responsible for bites on humans, it’s also important to gain a better understanding of where and when they are most likely to encounter people in the water, to encourage responsible ocean use and swimmer safety,” she said.

“They are even less understood, and I’m interested in the movements and habitat use by scalloped and great hammerheads in Hervey Bay, along with smooth hammerheads in warm temperate waters off New South Wales.”

“Investigating the impacts of fishing on these species is imperative, especially given that great and scalloped hammerheads are now listed as critically endangered by the International Union for Conservation of Nature.”

While Dr Holmes also specialises in the biology and ecology of other marine and freshwater animals, she finds sharks by far the most intriguing.

“Sharks are incredible, yet our knowledge of their movements and behaviours is limited, and they are also challenging to study which makes finding discoveries about them all the more exciting,” she said.

“My focus is on the large breeding individuals, which for female tiger sharks means they are usually over 3.5 metres in length.

“As you can imagine, this makes them difficult to catch and secure to be able to attach satellite tags and take appropriate biological samples.

“Hammerheads have their own challenges – they are extremely susceptible to dying from stress when they are caught, so data collection and release needs to happen very quickly.” 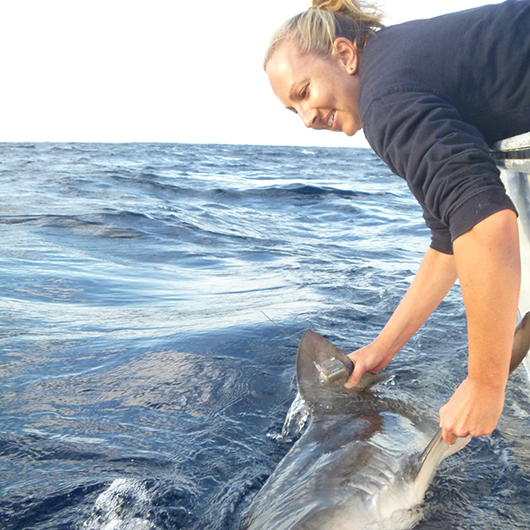 Time is right to explore uni options with free course

With many people reassessing their career goals due to COVID-19, USC is offering a free course for those wanting to sample higher education and explore their study opportunities.