Following Australia’s recent bushfire crisis, a USC scientist working to preserve forests has warned that vines that once protected vegetation from fire may now be drying into fuel.

“Lianas growing extensively over the top of trees actually protect forests from fire, but if they’re not properly managed, dried lianas can act as fuel for fires,” said Dr Marshall, who is an Australian Research Council Future Fellow.

“Increasing fire resulting from climate change is likely to worsen this effect because some forests will likely become too dry for lianas, leaving dried out vegetation behind for fires to spread – even up into the forest canopy.

“This is unusual for rainforest areas, but in preparation for our long-term experiments, we are hearing accounts of recent incidences of this in north Queensland, which is of great concern for forest managers.

“Forests are also vital for our planet – so when vines are stopping them from growing or contributing to fuel loads, we need to take notice.”

The lead research partners of USC, the University of York and Newcastle University are collaborating with Missouri Botanical Garden, University of Leeds, University of Copenhagen and numerous other academic institutions to assess two major rainforest sites in Australia and Tanzania, and other vegetation data from across the world.

They are focussing on determining whether lianas help or hinder the recovery of forests after damage caused by tree-felling or cyclones.

The research is aiming to test a new hypothesis on how lianas affect forests worldwide, which has been published this week in Frontiers in Forests and Global Change.

In Australia this year, the USC research team will partner with the Wet Tropics Management Authority, various levels of government, local conservation groups, and private landowners who are responsible for daily forest management decisions regarding the finely balanced positive and negative impacts of these vines.

“It’s gruelling, tropical field work that we expect will mainly take place in and around the Cassowary Coast and the Atherton Tablelands, but we’re also investigating areas from Lockhart River all the way down into New South Wales,” Dr Marshall said.

“We’re working to analyse the effects of lianas on forest recovery globally. This will tell us fundamental information about how forests work.

“It should also help us to inform forest managers how best to manage lianas that are smothering disturbed areas of forests. Should they be cut to free the trees? Or should they be left in place to protect small trees from strong winds and fire?”

Dr Marshall – who has joint tenure between USC and the University of York in the UK – is well-known internationally for keeping a careful eye on threatened forests. His attention to detail even led to the discovery of two new tree species and a chameleon species.

His most recent tree species discovery took place while on a survey expedition in the Eastern Arc Mountains of Tanzania.

“The purpose of being in that location was to survey the environmental factors that influence the amount of carbon that forests can store,” Dr Marshall said.

“We noticed this tree, which was 20 metres tall, and similar to other trees in the area. But the point of difference was the flowers on the particular tree. We managed to get a branch down and have the flowers assessed and found it was new to science.

“We are working in incredibly remote places to establish research sites so, in a way, these types of finds are almost to be expected. But we definitely don’t go out searching for them.

“If forests don’t have rare and threatened species then they have less diversity, which means they’re less healthy, and that will have lasting impacts on the Earth. Our research is working to get one step ahead of that.” 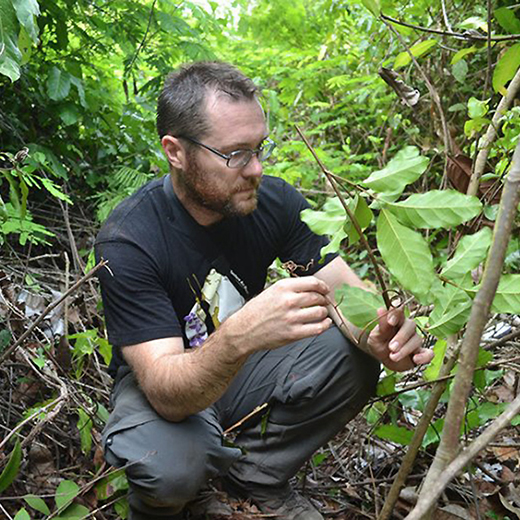