Seaweed science at USC is set make a splash on screens across the country today, on an ABC documentary that explores positive solutions to climate change.

The third and final episode of Fight for Planet A: Our Climate Challenge, a three-part series hosted by Craig Reucassel, will air on Tuesday 25 August, 8.30pm on ABC TV featuring footage from the Sunshine Coast and Moreton Bay.

Professor Nick Paul from USC’s Seaweed Research Group is one of the inspirational Aussies interviewed for the episode. There, he discusses with Mr Reucassel the enormous role that seaweed can play in reducing the cattle emissions that contribute to climate change.

“Our research team put on our wetsuits to film at Moffat Beach on the Sunshine Coast where we collected a puffy pink seaweed called Asparagopsis that grows prolifically along the coastline,” Professor Paul said.

“This particular seaweed has been proven to completely knock out the methane emitted by cows every time they burp.

“It actually has no impact on the cow and, in fact, they grow faster… so it’s great for the environment, but we can make it economically viable as well,” he said.

Professor Paul also filmed with the crew at the Bribie Island Research Centre in Moreton Bay where USC’s Seaweed Research Group has been fine-tuning the best way to grow Asparagopsis in large quantities, as well as how to improve the concentration of its most active chemical compounds.

“If we can feed every cow in Australia, we could cut the country’s greenhouse gas emissions by 10 percent,” Professor Paul said.

“Seaweed offers so many benefits, as a food source for people, as an immunity booster, for restoring the biodiversity of our coastlines, storing carbon from the atmosphere and more. Our research team is excited to be working to understand and realise the enormous potential that seaweed can offer to the economy, the environment and communities everywhere.”

A preview of the show is available on YouTube and the episode will continue to be available to watch on ABC iview. 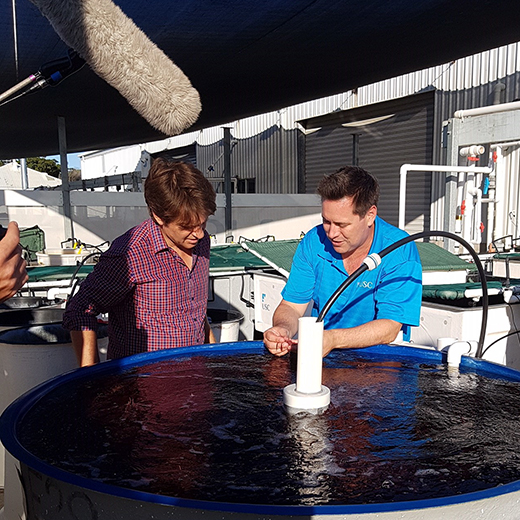 Ensuring our environments are safe and hygienic in the wake of the COVID-19 pandemic will be the topic of a free public webinar on Thursday 29 October from 6-7pm.