Three USC High Performance Student Athletes who benefited from the encouragement of others as they powered to success are leading an initiative to do the same for other young competitors and school students.

Jordan Mercer, Riley Thomson and Elliot Brown – top achievers in surf lifesaving, longboard surfing and skeleton (sled) racing respectively – are among the USC students partnering with local charity The Encouragement Foundation for the “I encourage you” initiative.

Coast entrepreneur and philanthropist John Shadforth, a USC Honorary Senior Fellow and Chancellor’s Stole recipient who founded the charity in 2007, said a series of motivational letters from the student athletes would be sent to young people across the region.

“We hope the recipients gain inspiration and reassurance from the shared experiences of these amazing student athletes,” Mr Shadforth said.

Jordan Mercer, a surf lifesaving athlete and champion in ironwoman, paddleboard and surf ski events around the world, is studying a Bachelor of Primary Education at USC.

The Noosa resident, who features on the first letter, said the idea was simple but powerful.

“My success in both my sport and my study has only been possible because of the encouragement I have received from family, friends and even strangers, every step of the way,” she said.

“If someone else reads one of these letters at a time when they need it, it could really have an impact.”

Moffat Beach’s Riley Thomson, who is in his first year of a Bachelor of Psychology (Honours), is the Under 18 Australian Junior Men’s Longboard Champion.

“I dream of becoming a world longboard champion and having a career in psychology,” he said.

“I hope to inspire others to follow their dreams regardless of their perceived limitations.”

Paramedic Science student Elliot Brown, of Mooloolaba, made a successful move from triathlon and track cycling to skeleton racing. He has set his sights on competing at a future Winter Olympics.

The first letters are being sent to USC’s High Performance Sport partner schools from Moreton Bay to the Fraser Coast, as well as local children’s charities. 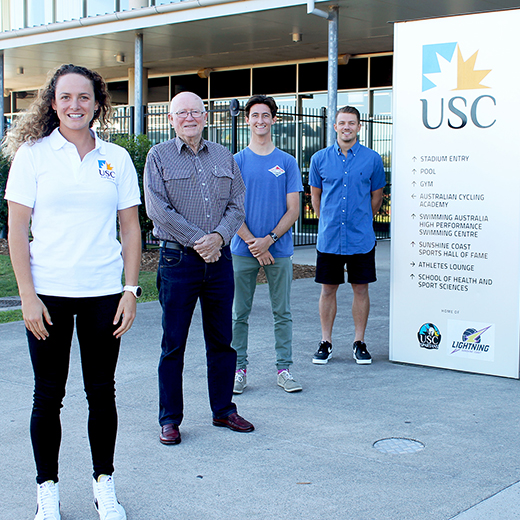