A book by a USC History academic delving into the muddy waters of flooding in South East Queensland and a mystery novel by a USC graduate set in 1940s Brisbane are among eight books nominated for an annual statewide people’s choice award.

Dr Margaret Cook, whose A River with a City Problem focuses on Brisbane’s destructive floods, and Dr Melanie Myers, who wrote Meet Me at Lennon’s for her USC Doctor of Creative Arts, are in the running for the $10,000 Courier-Mail People’s Choice Queensland Book of the Year.

“I am very excited to have my book recognised for this award, particularly because it’s judged by public vote. It’s such a strong field of finalists,” said Dr Cook, who lives at Ipswich and works at USC Sunshine Coast.

“The book, published by UQP, is about southeast Queensland flooding since 1893. It tells the stories of the people of Ipswich and Brisbane, revealing how these traumatic events affected their lives.

“I wrote it in the hope that we can learn from history and do all we can to reduce the devastation of floods in the future.”

Dr Myers, who also previously taught at USC, won the emerging writer category of the Queensland Literary Awards in 2018 for the manuscript that became her historical novel, published by UQP last year.

She said it amplified the voices of women who entertained American soldiers in Brisbane during World War II, with a plot focusing on a university student investigating the murder of a woman found on the banks of the Brisbane River.

“It’s an honour and a thrill to be nominated for this award,” she said. “Meet Me at Lennon’s has sold beyond both my publisher’s and my own expectations and this is a reflection of that.”

Voting for the award, via the State Library of Queensland website, will close on 17 August. The winner will be announced on 4 September. 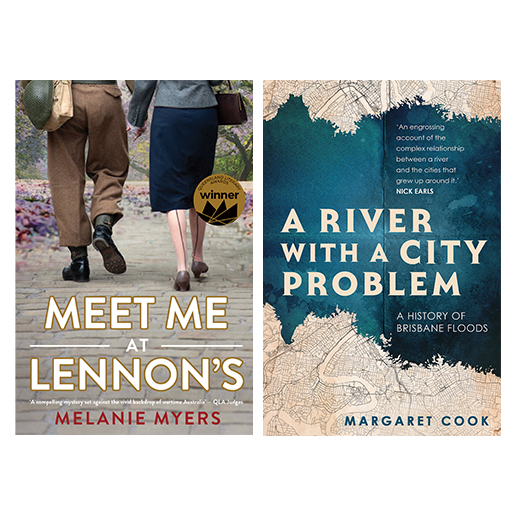