Researchers from the USC-led ‘Leaf to Reef: Biodiversity of Lady Elliot Island’ project are asking for citizen scientists to help compile a comprehensive species list of mammals, marine life and seabirds on and around the island.

“We have set ourselves the huge task of quantifying the island’s biodiversity and we can’t do it alone,” Leaf to Reef Project leader, USC marine biologist Dr Kathy Townsend, said.

The research project is part of the Reef Islands Initiative by the Great Barrier Reef Foundation which aims to establish a network of climate change refuges by protecting critical habitats in the world's largest coral reef system.

Located at the southern end of the Reef, Lady Elliot Island has been identified as a natural “Noah’s ark”, due to its importance as a wildlife refuge and a shelter from the harshest impacts of global climate change for northern tropical species.

“As a first step we are seeking photos of all vertebrate species – birds, turtles, sharks, fish and mammals – that people may have taken on previous visits to the island,” Dr Townsend said.

Now that lockdown restrictions have lifted and people can again travel to the island, the research team is also launching a four-year ‘BioBlitz’ or field study, with all visitors asked to join in the baseline data survey.

“It is as simple as visitors taking photographs and videos to capture their experiences with the incredible marine life and seabirds on the island and then sharing them with the research team,” Dr Townsend said.

Despite its importance, researchers said scientific knowledge about Lady Elliot Island was limited.

“For example, the Great Barrier Reef has 134 known species of sharks and rays in its waters, but we have no idea how many of them can be found around Lady Elliot Island,” Dr Townsend said.

“With the help of citizen scientists, we will be able to see how the island’s biodiversity is changing due to species drift, allowing us to measure the impact of climate change and act to safeguard against it.”

Research team member Asia Haines said other projects, such as Project Manta, had shown how successful involving community members in gathering scientific data could be.

“Close to 70 percent of the east coast database for Project Manta, which is investigating the biology and ecology of manta rays in Australia, has been contributed by recreational and professional divers,” said Ms Haines, a USC Research Fellow.

She said a silver lining of the pandemic lockdown was that many people might have had some extra time to search through their old photos and videos.

“Some contributed photos from Project Manta date back to 1968, so it doesn’t matter how long ago people may have visited Lady Elliot Island,” she said.

People are asked to send images and videos, with the date and approximate location of their wildlife and marine life sightings, to ahaines@usc.edu.au or submit them through www.facebook.com/Leaf-to-Reef-Biodiversity-of-Lady-Elliot-Island or www.instagram.com/leaf_to_reef/, #LeafToReef

The project team includes researchers from USC, University of Queensland and Southern Cross University, and is supported by Lady Elliot Island Eco Resort and Queensland Parks and Wildlife Service. 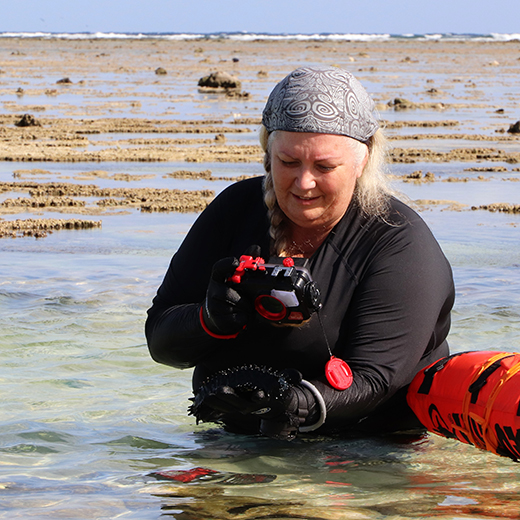