USC-led research in Bulburin National Park, between Bundaberg and Gladstone, has recorded 83 percent survival of the wild population of an endangered native macadamia nut plant, following the 2019-20 summer bushfires.

Associate Professor of Vegetation and Plant Ecology Alison Shapcott said the results were encouraging for the conservation of the Bulburin nut, Macadamia jansenii, with many plants already resprouting on the burned rainforest sites.

The Macadamia jansenii is one of the Top 30 priority threatened plant species targeted by Australia’s threatened species strategy for 2020. It is the most northern macadamia plant and related to the commercial species, but its nuts are not edible.

Dr Shapcott has led recovery efforts and research on the species since 2007.

Eight months after last summer’s fire season, she led a team from USC, Queensland Parks and Wildlife Service, Gidarjil Traditional Owners and the Macadamia Conservation Committee to assess the plants.

“A large area of rainforest burned during that season, including some of the recently discovered sites for Macadamia jansenii. Fortunately, the fire did not reach as far as the original known area,” she said.

“In our pre-fire census, 200 wild plants including seedlings were recorded from a very small area within the park.

“Some of the mature trees that were feared to have died have started resprouting from the base and most of the deaths were of seedlings and very small plants. Only three mature adult plants were killed by the fires.

The survey was part of the Queensland Department of Environment and Science response for bushfire recovery and was supported by the Australian Government’s ‘Bushfire recovery package for wildlife and their habitat’.

Dr Shapcott estimated that nine percent of the fire-impacted plants would remain vulnerable to bushfire for at least another year while the resprouts established.

“We are hoping for good rain this spring and summer to promote growth and the future resilience of the Bulburin nut populations,” she said.

Dr Shapcott has been researching the population genetics and ecology of rainforest plants since 1985. 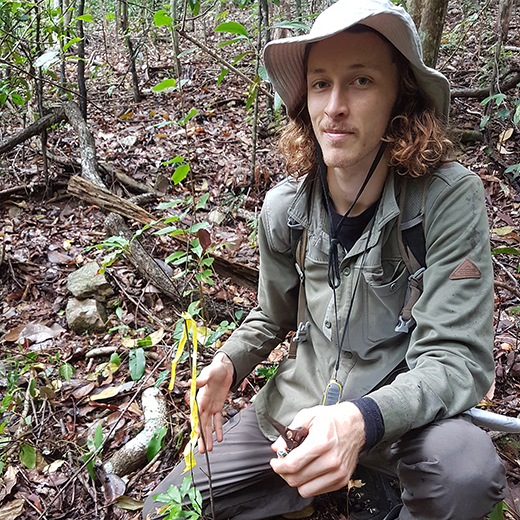 Hatchlings to put emu ‘gender reveal’ to the test

A new technique that could end the gender guessing game for emu and the endangered Southern Cassowary has been put to the test at USC, with the hatching of 10 fluffy chicks.