The 26-year-old from Hervey Bay recently capped off his studies at USC by being awarded the University’s highest honour for a graduating student – the Chancellor’s Medal.

“I could not have anticipated the opportunities that would come my way when I first enrolled to study Accounting when USC opened its Fraser Coast campus in 2016,” said Myles, who grew up on his family’s beef property at Gayndah, west of Maryborough.

“My mantra is that coming from a small regional area should never hold you back, so during my time at USC, I was determined to take every opportunity to advance my knowledge, skills, career and global experience.”

He was named a New Colombo Plan Fellow after being ranked as the top candidate for South Korea and was the first USC student to achieve this honour.

“One of these internships was with changemaker company Root Impact where I worked in the global partnerships team helping to connect South Korean organisations and social entrepreneurs with foreign organisations, governments and social start-up firms,” he said.

“Through the scholarship, I also had the opportunity to gain valuable networking experience by attending Australian Embassy functions in Seoul and events organised though the Australian Chamber of Commerce, including the 2018 Australia-Korea Business Council meeting.”

Myles received several academic awards during his studies and graduated with a University Commendation for Academic Excellence after achieving an overall grade point average of 6.53 out of a possible 7.

It was also his volunteer work with a range of student and community events and initiatives, both in South Korea and at the Fraser Coast, that led to his successful nomination for the prestigious Chancellor’s Medal.

Myles credits the support and encouragement of his family and USC Fraser Coast Lecturer in Accounting Dr Ratna Paudyal for much of his success.

“If it wasn’t for Dr Paudyal’s belief in me and his ability to generate a positive mindset, I would not have performed as well academically or have embraced as many leadership opportunities that I did,” he said.

Dr Paudyal said Myles was a worthy winner of the Chancellor’s Medal who had contributed extensively to USC and the wider community during his undergraduate degree.

“As a student, he possessed an entrepreneurial spirit to initiate change, enjoyed contributing to help teams achieve their chosen goals and worked to enhance the university experience of other USC students,” Dr Paudyal said.

For more information about studying at USC go to www.usc.edu.au/study 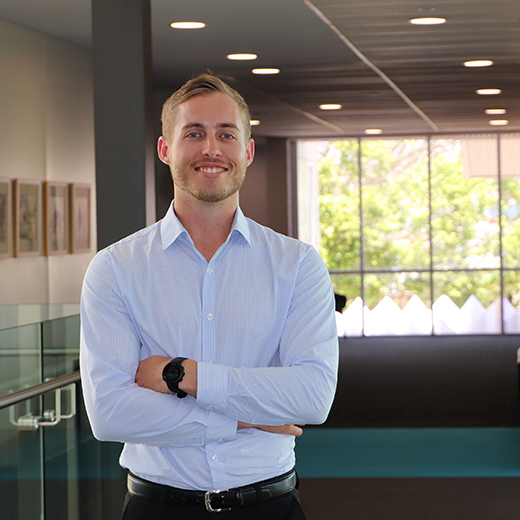