Jess Johnson of Perth had a different career switch in mind when she decided to study Animal Ecology at USC Fraser Coast– until she met a koala-detection dog named Bear and his other canine companions.

“For more than a decade, my career goal was to combine my background in the building design industry and my experience and interest in the canine industry to become a behavioural ecologist with a strong focus on animal exhibit and enclosure design,” Jess, 32, said.

Now she has added working in wildlife detection and protection to her career goals after completing a final-year undergraduate research project with USC’s Detection Dogs for Conservation program, which trains rescue dogs to find and protect vulnerable species.

Working with supervisor Dr Romane Cristescu, who co-founded the program, Jess used radio tracking devices fitted to koalas in the Redland area to assess USC/IFAW koala detection dog Bear and his handler’s accuracy and efficiency for detecting koalas in the wild.

Bear gained global media fame last summer after he was deployed in a partnership between USC and IFAW to find koalas in fire-ravaged areas across Australia’s east coast – even earning praise on Twitter from Hollywood stars Tom Hanks and Leonardo DiCaprio.

“It wasn’t until I started the degree that I discovered the remarkable work that USC was doing to utilise canines to save so many vulnerable species,” Jess said.

“It was really a perfect match for me, as I am passionate about dogs and have more than a decade of experience in the canine industry as a dog obedience instructor, acting pound officer, animal rescue volunteer and puppy foster carer.”

As a pathway to a PhD, Jess is now expanding her research and field skills by continuing Honours research on koala habitat protection with the Detection Dogs for Conservation team and Dr Cristescu.

Her Honours project aims to critically assess the success of proposed offset strategies for koala conservation by analysing how they are developed, approved and monitored at a national level under the Environmental Protection and Biodiversity Conservation Act.

“I have a strong passion for animals and, ultimately, I want to contribute to research that enriches their lives, including those in captivity,” said Jess, who was working as a draftsperson and studying Psychology in Perth when she enrolled at USC.

“It was a huge step to pack up my life in West Australia, but I was excited by USC’s Animal Ecology program and its focus on studying animals in their natural habitats to better understand how to protect their future.” 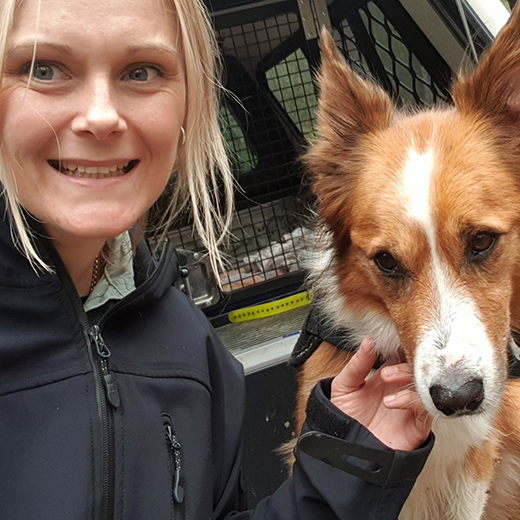 A decision to explore Australia has led to a brand-new life and career focus for former Germany bookkeeper Beke Koehn, who graduated recently from USC.

Two new USC Fraser Coast graduates are working to improve mental health and wellbeing in the community as social workers at hospitals in Bundaberg and Hervey Bay.

As a former police officer and army soldier, USC Social Work student Michelle Minchin has helped people during some of their lowest times – including when they’ve been impacted by domestic violence or suicide