The study by a team of academics from USC and The University of Queensland was published today in Proceedings of the National Academy of Sciences of the United States of America.

Lead author Associate Professor Volker Herzig of USC said the researchers found that toxins in the funnel-web’s venom had evolved to cause pain as a defence against non-human predators, even though “a high dose can cause death in humans”.

“The funnel-web venom is incredibly complex and contains more than 3,000 different peptides, but we were just interested in the delta hexatoxins (the highly-lethal class of toxins) of which there are only a few representatives in each venom,” Dr Herzig said.

“Originally the delta hexatoxin evolved to kill insects but over time it was modified as a protective mechanism, particularly in the males that leave their burrows for longer periods to find a mate and thereby are more likely to encounter predators.

“We still don’t know for sure what the natural predators of these spiders are – they could include reptiles such as lizards or geckos, marsupials such as dunnarts, mammals such as rats, as well as birds, and wasps.

“However, given that this lethal toxin binds to sodium channels (membrane proteins responsible for sending electrical signals through the body), the natural predator of funnel-web spiders and humans must share some similarity in the toxin-binding site of their respective sodium channels.

“So, it’s really only an unfortunate coincidence that humans are also affected by this toxin from funnel-web spiders.”

Dr Herzig further pointed out that only 0.5 percent of all spiders can be considered potentially dangerous for humans. While funnel-web bites can be fatal, particularly for children, there have been no fatalities recorded since the introduction of a funnel-web antivenom in the early 1980s.

The research team, which includes colleagues from UQ where the research began, studied the venoms of 10 different funnel-web species collected from New South Wales, Queensland, Victoria and Tasmania.

The team was able to increase the total number of known delta hexatoxins from Australian funnel-web spiders from 9 to 31, which will provide a broader basis for future research on these interesting toxins.

“It has always been a mystery for us why funnel-web spiders can cause human fatalities, as humans do not feature in their prey spectrum,” Dr Herzig said.

“We are therefore excited to solve this mystery by discovering that the insecticidal effects of the delta hexatoxins evolved prior to their activity for predator deterrence, and that their human toxicity is just an unfortunate evolutionary coincidence.” 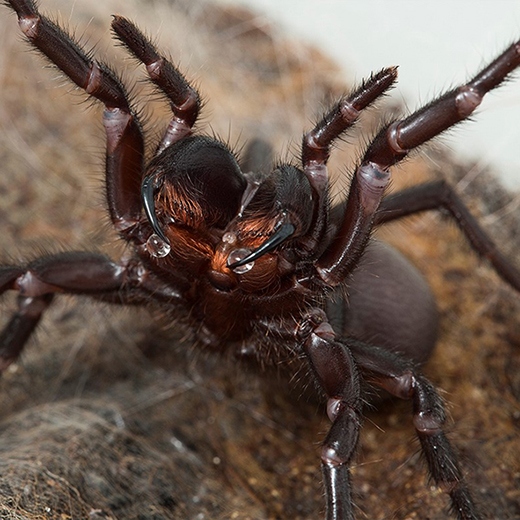