Action is needed to protect and restore disappearing local seagrass meadows, according to a USC scientist involved in an international study that has highlighted the important role seagrass plays in absorbing carbon dioxide from the atmosphere.

USC Senior Lecturer in Physical Geography Dr Javier Leon contributed to new modelling that found an increase in CO2 emissions equivalent to five million cars each year has been caused by the loss of seagrass meadows around Australia’s coastline since the 1950s.

The collaborative study, led by the Centre for Marine Ecosystems Research at Edith Cowan University, calculated that since the mid-20th century around 161,150 hectares of seagrass had disappeared nationally, resulting in a two percent increase in Australia’s annual carbon dioxide emissions.

“Large-scale carbon dioxide sequestration is a must if we want to keep atmospheric CO2 levels within an adequate range in the following decades,” he said.

“Together with other coastal ecosystems such as mangroves, seagrass meadows play a very important role in this by efficiently capturing and storing so-called ‘blue carbon’ in their soil at a rate estimated to be about 30 times faster than most forests on land.”

The paper, published recently in Global Change Biology, was based on data derived from current research by ECU PhD student Cristian Salinas on carbon stocks of Cockburn Sound off the coast of Western Australia.

Dr Leon performed the analysis of spatial data and mapping for the project that including researchers from the International Atomic Energy Agency and Saudi Arabia’s Red Sea Research Centre.

He also contributed to wave modelling that showed without seagrass acting as a buffer, hydrodynamic energy from waves, tides and currents also played a significant role in causing carbon loss by moving the seabed sand.

Researchers found hydrodynamic energy from water movement was much higher in the shallow water and associated low levels of carbon were recorded in these bare areas.

However, seagrass established in shallow waters was found to have significantly more carbon stored compared to those growing in deeper areas, highlighting the importance of preserving nearshore meadows.

Dr Leon said there were wide-ranging local implications for the vast seagrass meadows stretching from Moreton Bay to the Fraser Coast.

“Seagrass meadows are quite fragile, particularly to human activities that change water quality,” he said.

“Previous research by Dr Leon in 2013 on seagrass in Moreton Bay in 2013 found that the main factors affecting meadows were sea-level rise and water turbidity.

“To offset the negative impacts of sea-level rise and increasing wave energy, the main priority should be improving water quality by reducing soil and fertiliser runoff.” 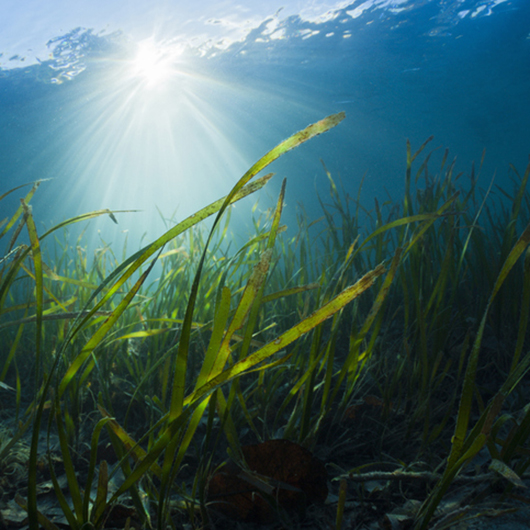