USC researchers have shed new light on the way reptiles care for their young after capturing rare footage of skinks fighting off Eastern Brown snakes and chasing magpies.

Husband and wife research team Dr Greg Watson and Dr Jolanta Watson used cameras in the Snowy Mountains over a three-year period to study the behaviour and ecology of the Cunningham’s skink, Egernia cunninghami.

Dr Greg Watson said they were surprised to record evidence of lizards actively defending their offspring against predators.

“The majority of reptiles exhibit no parental care, and aggressive behaviour towards unwelcome predators has rarely been recorded in the natural environment,” Dr Watson said.

He said the encounters, outlined in a paper released today in the Australian Journal of Zoology, demonstrated that parental care could be more sophisticated than previously thought for lizard species.

“Among reptiles, evidence of parental protection in their natural environment has been typically anecdotal. A few studies of members of the crocodile family and an egg laying lizard have been previously documented,” Dr Watson said.

“Our observations of aggressive biting and pursuits by adult skinks may shed new light in relation to parental behaviour and offspring survival mechanisms in live-bearing lizards.”

The first encounter involved an Eastern Brown snake trying to sneak up on recently born skinks basking in the sun. Their mother is recorded running towards the snake, biting the predator for several seconds before releasing it and returning unharmed to her young.

Snakes were not the only predator to be vanquished by the protective parents, with skinks regularly chasing magpies away from their young.

The initial aim of the Watsons’ field study was to use thermal imaging to record how organisms that live in a range of habitats, such as skinks, would cope with climate change.

The sun-loving, spiny-tailed lizards, who birth live young, exist in the wild in large social groups with the offspring usually staying with their parents for several years.

The Watsons, who recorded the skinks giving birth in their natural environment, said the study evolved into an opportunity to study the social bonds and interactions between offspring and parents in lizards.

“For the majority of lizard species, we have a limited understanding of the functional significance of these associations,” Dr Jolanta Watson said.

Available data suggests infanticide – where mature animals kill young offspring of the same species – can occur among the genus of skinks.

“We evidenced no such behaviour among the Cunningham’s skink, and both sub-adult and adult skinks demonstrated no aggression towards each other or towards young or newborns,” she said.

“Understanding the factors that initially bring parents and offspring together and stabilize those associations is crucial for our understanding of social evolution more broadly.” 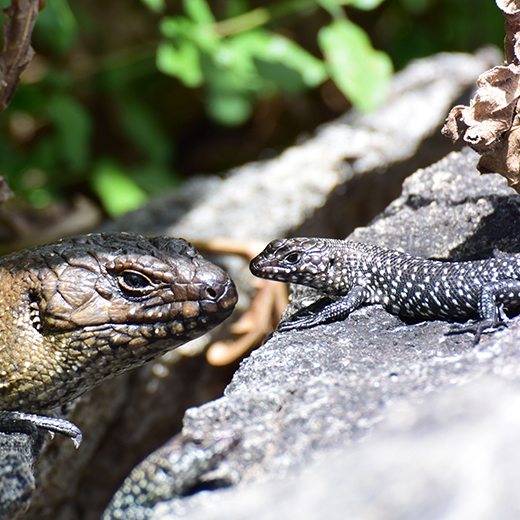